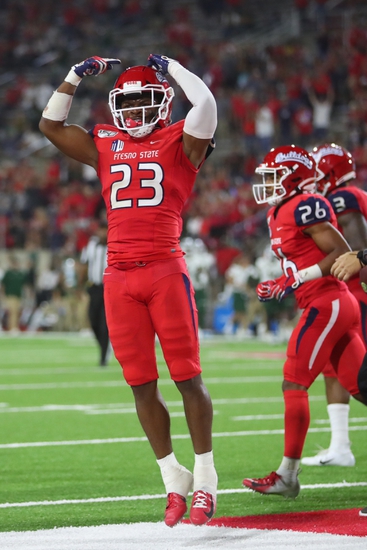 Two teams with all to play for coming off of disappointing losses face off Friday when the Fresno State Bulldogs (4-5, 2-3 MWC) head to SDCCU Stadium to take on the San Diego State Aztecs (7-2, 4-2 MWC) in Mountain West Conference West Division action. Despite the Bulldogs’ 37-35 loss to Utah State and the Aztecs’ 17-13 loss to Nevada on Saturday, both still have a solid shot of reaching the MWC championship game.

Both teams would have looked better heading into this week with wins, but now the Aztecs are 4-2 in conference play with Hawaii and Nevada one game back at 3-3 and Fresno State sitting at 2-3. A Fresno State win would put four teams on three losses with the Aztecs still needing to go to the islands to face Hawaii where the Rainbow Warriors are so good. So this game means everything to both teams and their chances of reaching a title game.

Fresno State has been all over the place this season with impressive losses such as an eight-point loss to USC and a two-overtime three-point loss to Minnesota that is currently ranked No. 7 in the AP poll and still undefeated on the season. But it also lost by 19 to Air Force and 10 points to Colorado State, so it’s difficult to know what to expect from the Bulldogs on any given week. In the past two weeks, Fresno State got out to a big lead at Hawaii, allowed the Rainbow Warriors to come back and tie the game late before kicking a game-winning field goal as time expired, followed by leading Utah State late and allowing a game-winning field goal as time expired to the Aggies.

In a conference that loves offense, the Bulldogs rank No. 4 in the MWC and 30th in FBS averaging 34.3 points per game led by junior Ronnie Rivers. Rivers is seventh in the MWC in rushing averaging 72.8 yards per game but is second in the conference in scoring with 13 touchdowns on the season. Senior Jorge Reyna who is 42nd in FBS with 234.0 passing yards per game with 11 passing touchdowns and six interceptions. Nine different receivers have caught more than 100 yards of receiving yards led by Zane Pope’s 38 receptions and 397 yards.

This matchup should be an interesting one in that Fresno State scores with ease but allows 32.4 points per game (8th in MWC and 103rd in FBS), while San Diego State’s offense struggles to score with just 20.8 points per game (11th in MWC and 112th in FBS) but is the No. 1 defense in the MWC allowing just 14.4 points per game (8th in FBS). Despite their recent national ranking before the home loss to Nevada, the Aztecs simply hadn’t blown out a single opponent. A 31-10 win over winless New Mexico State is the largest margin of victory on the season, while San Diego State also has wins by six points over Weber State, nine points over UCLA, four points over Wyoming, and three points over UNLV.

San Diego State simply doesn’t have much to talk about offensively, with senior Juwan Washington leading the rushing attack with 131 carries for 450 yards (3.4 yards per carry) and just two touchdowns, while senior Ryan Agnew is ninth in the MWC averaging just 180.3 yards passing per game with 10 touchdowns. Agnew is efficient, though, completing 62.2 percent of his passes. The Aztecs have just one receiver listed in the top 25 in the MWC with sophomore Kobe Smith leading the team with 46 receptions for 554 yards and four touchdowns.

The Aztecs simply haven’t been very good at home this year. They are 2-2 at SDCCU Stadium this year and have scored 62 points at home while allowing 62 points at home. Fresno State is also 2-2 on the road, but it has only been outscored by an average of 2.25 points per game. This is also simply the type of game that the Bulldogs have thrived in as a road underdog, going 20-14 against the spread in that situation since 2011 and 9-5 since 2016. San Diego State is a shocking 1-8 against the spread as a home favorite since the beginning of the 2018 season.

Go with Fresno State plus the points in San Diego on Friday night.