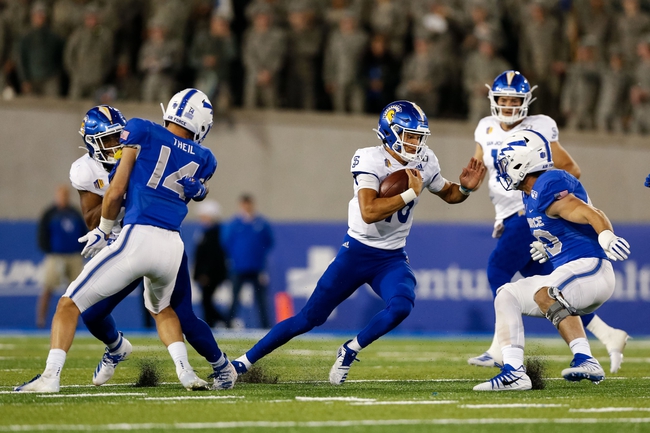 The New Mexico Lobos visit CEFCU Stadium in San Jose, California on Friday to play the San Jose State Spartans. The Lobos dropped to 2-2 on the season following their Saturday loss of 17-10 to Liberty. The Lobos gained 223 yards on the ground in the loss with Ahmari Davis the leading rusher with 99 yards. Quarterback Tevaka Tuioti passed for 139 yards and one touchdown, but threw a pair of costly interceptions.

The Spartans are also 2-2 on the season following a loss of 41-24 to Air Force last Friday. San Jose State scored a touchdown on its first possession on a one-yard run by DeJon Packer, but could not keep up with the Air Force offense. San Jose State failed to convert on four occasions on fourth-down with one of those coming at the Air Force 1-yard line.

The Spartans starting quarterback Josh Love has thrown for 1,013 yards, five touchdowns and one interception. Nick Nash leads the running attack for the Spartans with 203 yards and two touchdowns, while Tre Walker with 230 yards leads all receivers for San Jose State. The leading tackler for San Jose State is Ethan Aguayo with 58.

The Spartans were beaten in their last outing by a solid Air Force squad, while the Lobos were beaten by Liberty. San Jose State has covered the nut in 7 of its last 10 and 6 of the last 7 during conference action. New Mexico has had problems covering the spread failing to do so in 8 of the last 11 overall and in all of the last 4 following ATS loss. Home chalk looks strong in this matchup. Final Score Prediction, San Jose State Spartans win and cover ATS 27-17