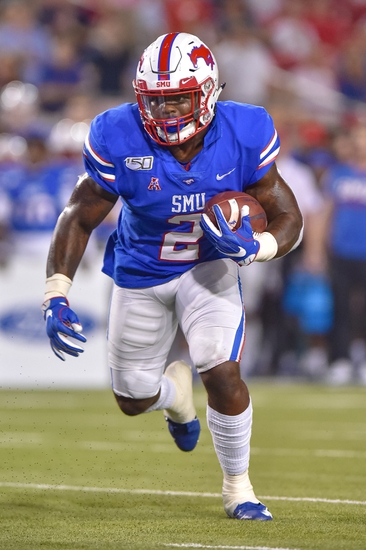 Two football teams with very different goals for the rest of the season matchup Sunday at Gerald J. Ford Stadium in Dallas, Texas when the East Carolina Pirates (3-6, 0-5 AAC) hits the road to take on an SMU Mustangs (8-1, 4-1 AAC) team that was undefeated one week ago and still looking to reach the American Athletic Conference title game. The problem for the Mustangs is the logjam atop the AAC West Division standings and two difficult tests remaining.

It was just a week ago when SMU was ranked No. 15 in the nation, was undefeated, and there were whispers discussing how this SMU team might be last year’s Central Florida from two years ago. But a thrilling 54-48 defeat on the road at Memphis brought everything back into reality and missing the AAC title game is now a distinct possibility, especially considering that SMU still has a trip to Annapolis to face West Division leading and No. 25 Navy still on the schedule, as well as a battle with surprising Tulane.

SMU’s offense is elite, ranking seventh in FBS with 43.6 points per game and it can get it done both through the air and on the ground. The Mustangs ranked 11th in passing with 318.6 yards per game led by junior quarterback Shane Buechele, who has passed for 2,781 yards -- good enough for fifth in FBS -- and 23 touchdowns this season with just seven interceptions in 342 attempts. In the loss to Memphis, Buechele completed 34-of-54 passes for 456 yards and three touchdowns. Senior running back Xavier Jones also ranks No. 15 in FBS with 906 rushing yards and tied for fourth with 15 rushing touchdowns.

East Carolina has lost four straight and only has one win against an FBS team this entire season, and that was a 24-21 win over Old Dominion, which only has one win all year long and that is against an FCS school. The defense has been the problem all year for the Pirates. While their scoring defense stats for the season are just below middling at 88th in FBS allowing 30.2 points per game, that total inflates to 36.6 points per game when only taking FBS teams into account. That’s a tough proposition for a team that is going to have to face SMU’s offense.

The Pirates can move the ball and rank 46th in FBS passing the ball for 254.0 yards per game. Although not very efficient, sophomore quarterback Holton Ahlers is a top-25 passer with 2,207 yards and 11 touchdowns, although he has thrown eight interceptions. He had a career game in last week’s narrow 46-43 loss against No. 17 Cincinnati when he passed for 535 yards on 32-of-52 passing and four touchdowns. Freshman C.J. Johnson has emerged as a leading receiver after last week’s 283-yard, 12-reception game in the loss.

These are always fun games to try to figure out. Will SMU crumble after its first loss of the season or will it rally and look to crush its next opponent? Will East Carolina continue its upward trend offensively, or did it catch Cincinnati sleeping at home in Greenville? Both teams are good against the spread (SMU 6-3, ECU 5-4) and while SMU has gone over the total in eight of nine games, the Pirates have held it under the total in six of nine.

In the end, there are a handful of situations that make SMU the pick. The Mustangs have everything to play for -- bigger and better bowl games, the AAC title game, and more. East Carolina will hope to win a conference game with Tulsa and UConn remaining. SMU will be at home where it has covered in three of its four games, and when it does cover, it covers by 10 points. And East Carolina is on the road, where it is averaging just 17.0 points per game. Give up the big points and take SMU.