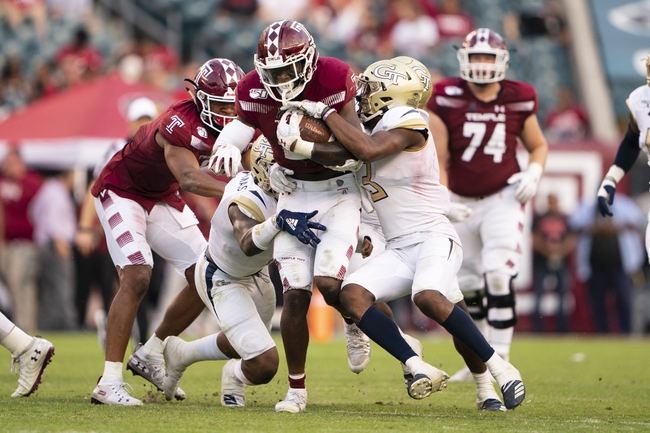 The Temple Owls head to Dallas, TX to take on the 19th ranked SMU Mustangs in a American Athletic Conference contest.  The Owls enter this game with a 5-1 record and a 2-0 record in conference play. The Owls are coming off a 30-23 win against Memphis, who at the time was ranked.  The Mustangs head into this home contest with an undefeated record of 6-0 and 2-0 in conference play. The Mustangs were on a bye this week.

Temple enters this contest, having only given up more than 17 points twice this season.  Temple is 2-0 against ranked teams this season. The Owls have wins over Maryland and Memphis.  The Owls only loss was a 38-22 defeat at Buffalo. The Owls are led by quarterback Anthony Russo. He has completed 129/218 passes for 1,503 yds, while throwing 13 touchdowns and throwing 6 picks. The Temple backfield has combined for 8 rushing touchdowns on 995 yds rushing. Isaiah Wright has accumulated 5 receiving touchdowns on the season.

The Mustangs enter this game having scored at least 37 points in all 6 of their games.  Quarterback Shane Buechele has thrown for 1,665 yds via his 132 completions thus far. He has 12 passing touchdowns on the year for the Mustangs.  Running back Xavier Jones is off to a phenomenal start as he has 647 yds rushing, to go along with his 12 rushing touchdowns. Jones also has 1 receiving touchdown.  Wide receiver James Proche leads the receiving core with 529 yds on 45 receptions and has totaled 7 touchdowns. The Mustangs have 26 sacks defensively.

The over is 4-4 when Temple is the away team.

SMU is 5-5 ATS against conference opponents.

The over is 6-1 when SMU is the favorite.

While SMU is a perfect 6-0 on the season and putting up points at will, I like what Temple has done this year.  Temple is 2-0 this season against ranked opponents and have had a pretty solid defense to this point. Temple is 5-1 ATS since 2018 and have came ready to play against ranked opponents this season.  I am going to take the points with Temple. Final score prediction, SMU wins but fails to cover 37-34.