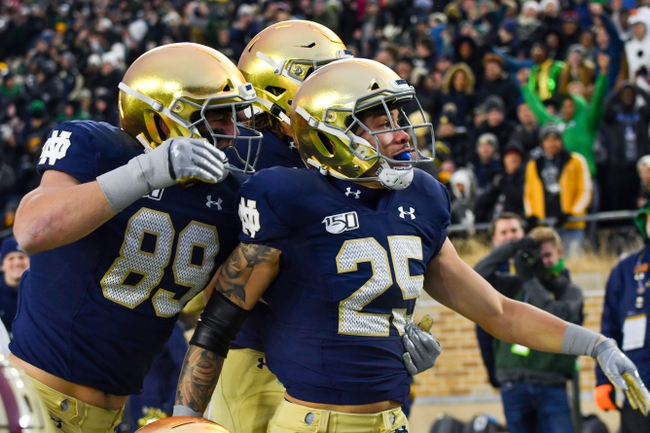 In the Cardinal loss to California, Stanford was led on offense by quarterback Davis Mills.  Mills completed 26 of 35 for 283 yds, while adding a touchdown and 2 picks.  It looked as if Stanford would sneak away with a victory.  Stanford took a 20-17 lead with under 3 minutes to go in the game, thanks to a Ryan Sanborn field goal.  However, California responded with a touchdown with 1:19 left in the game.  The Cardinal were out gained 424 to 344 in the game.  Stanford had 2 turnovers in the loss.

Fighting Irish are 4-1 ATS vs a team with a losing record.

Fighting Irish are 7-3 ATS in their last 10 games overall.

The under is 5-1 in Fighting Irish last 6 road games.

Cardinal are 1-4 ATS in their last 5 non-conference games.

Cardinal are 2-8 ATS in their last 10 games overall.

The over is 4-1 in Cardinal last 5 games overall.

The underdog is 6-1 ATS in their last 7 meetings.  The under is 7-2 in the last 9 matchups.  Stanford has lost 4 of 5, while Notre Dame has won 4 in a row.  Stanford has won 7 of the last 10 matchups, but Notre Fame will take care of business in this one.  The Fighting Irish are 3-2 away from home.  The Cardinal are 3-8 ATS this year.  Even thought trends in this matchup would say Stanford should compete in this one, I just can' see it happening.  Stanford will be over matched, Notre Dame covers in this one, 37-20.