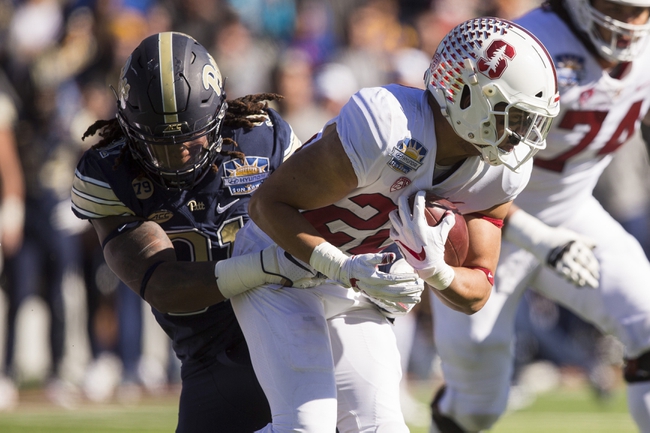 The Northwestern Wildcats and the Stanford Cardinal meet in a week 1 non-conference college football matchup from Stanford Stadium on Saturday afternoon.

The Northwestern Wildcats come into the 2019 season looking to build on a solid 2018 season that saw the Wildcats finish the year with a 9-5 overall record, including an 8-1 record in Big Ten conference play, winning the Big Ten West division regular season and booking a spot in the Big Ten title game, a game that Northwestern lost to Ohio State by a final score of 45-24. The Wildcats were invited to the Holiday Bowl where they defeated Utah by a final score of 31-20. Hunter Johnson will take over the reins of the Northwestern offense after longtime QB Clayton Thorson went pro. Isaiah Bowser will hope to follow up his solid 2018 season where he logged 866 yards and 6 touchdowns in relief of Jeremy Larkin who was sadly forced to retire. Bennett Skowronek will be in charge of leading Northwestern’s receiving group after recording 45 catches for 562 yards and 3 touchdowns. Defensively, the Wildcats bring back nine starters and 7 of Northwestern’s top 10 tacklers from last season. Blake Gallagher and Paddy Fisher combined for 243 tackles and will be expected to lead the team from the linebacking position once again while JR Pace and Travis Whillock will anchor the Wildcat secondary with Pace logging 82 tackles and 4 interceptions last season. As a team, Northwestern averaged 354.5 yards of total offense and 24.2 points per game while allowing 390.9 yards and 23.2 points last season.

The Stanford Cardinal will look to build on a great 2018 season of their own, finishing the year with a 9-4 overall record, including 6-3 in the Pac-12 South division, finishing in 3rd in the division. The Cardinal received an invite to the Sun Bowl where they defeated Pittsburgh by a final score of 14-13. KJ Costello is back under center after throwing for 3,540 yards, 29 touchdowns and 11 picks on 65.1% passing last season. Bryce Love is gone from the Stanford backfield after going pro, but Cameron Scarlett is back after logging 8 scores last season and will be expected to have a stronger season as the #1 back with a lot of talent in goal-line situations. Stanford will have to retool their receiving corps after their top three receivers finished up with the program, but Colby Parkinson will be expected to lead Stanford’s receiving group at tight end after logging 29 grabs for 485 yards and 7 scores last season. Defensively, Stanford returns five starters and just three of their top seven tacklers. The good news is that their pass rush is back with all three starters returning including Michael Williams, Jovan Swann and Dalyn Wade-Perry. The bad news is that the Cardinal have to rework the linebacking group after leading tacklers Sean Barton and Bobby Okereke however Jordan Fox is back after logging 61 tackles last season. Malik Antoine is back to lead Stanford’s secondary at safety after logging 53 tackles last season while Paulson Adebo had four picks and 64 tackles. As a team, Stanford averaged 381 yards of total offense and 28.4 points per game while allowing 410.1 yards and 22.9 points per game last season.

Stanford has the more proven and better quarterback in KJ Costello and are at home so they should probably be favored as the Cardinal can’t afford to lose many games, especially at home where they have a tough run of opponents coming up. However, there are still a ton of question marks on both sides for the Cardinal as the receiving group is mostly unproven and the defense has to be completely reworked. On the other hand, there’s a lot to like about Hunter Johnson for Northwestern as many think the Clemson transfer is a better passer than what Clayton Thorson was for the Wildcats, and the Wildcats have also kept a huge chunk of their strong defensive unit from last season together. I think Northwestern has all the tools to pull off the upset here, but I’ll take the points just to be safe.