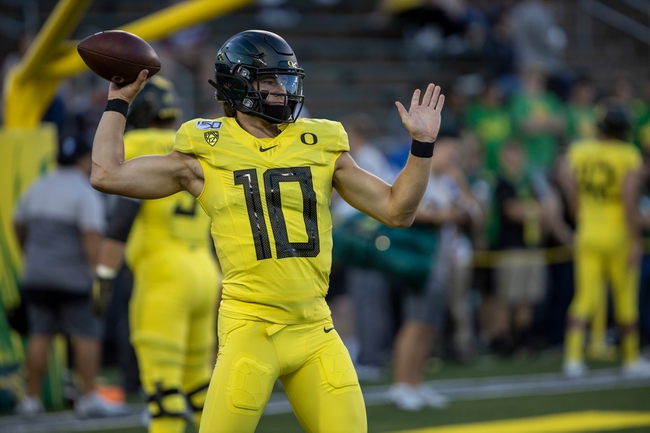 The Oregon Ducks and the Stanford Cardinal meet in a week 4 Pac-12 conference college football matchup from Stanford Stadium on Saturday night.

The Oregon Ducks will look to build on back-to-back wins after a 35-3 win over Montana last time out. Justin Herbert has thrown for 868 yards and 11 touchdowns on 73.3% passing while Travis Dye leads Oregon in rushing with 152 yards on the ground. CJ Verdell has 149 rushing yards and 2 TDs while Darrian Felix has 127 rushing yards and a pair of scores of his own. Johnny Johnson III leads Oregon’s receivers with 19 catches for 223 yards and 2 touchdowns while Jacob Breeland has 13 grabs for 187 yards and 3 TDs. Defensively, Troy Dye has a team-high 21 tackles with 16 solo tackles in there while Mase Funa has added 3 sacks to the cause this season. As a team, Oregon is averaging 505 yards of total offense and 44.3 points per game this season.

The Stanford Cardinal will be looking to rebound from back-to-back losses after a 45-27 loss to UCF last time out. K.J. Costello has thrown for 351 yards, 2 touchdowns and an interception on 57.8% passing while Cameron Scarlett leads the Cardinal on the ground with 224 rushing yards this season. Colby Parkinson leads Stanford’s receiving group with 17 catches for 178 yards while Connor Wedington has 15 grabs for 162 yards and Michael Wilson has 11 catches for 118 yards and 2 touchdowns. Defensively, Casey Toohill leads the Cardinal with 19 tackles, including 9 solo tackles as well as a pair of sacks while Paulson Adobo is right behind with 17 tackles this season. As a team, Stanford is averaging 349.7 yards of total offense and 21.3 points per game this season.

Getting a home dog in a conference game like this is tempting, considering that Stanford’s two losses came on the road and they only allowed 7 points in their only home game this season. However, Oregon is a mile ahead of Northwestern, and while the Ducks have been whipped by Stanford in the last couple of years, those Stanford teams were all better than Oregon at the time. The last time that Oregon was ranked and Stanford wasn’t, the Ducks won by 29 points. We saw how Stanford struggled to keep pace with a high-scoring team like UCF and I just think that Oregon can give the Cardinal the same kinds of problems. I’ll lay the points with Oregon on the road here as I see the Ducks just running past the Cardinal.