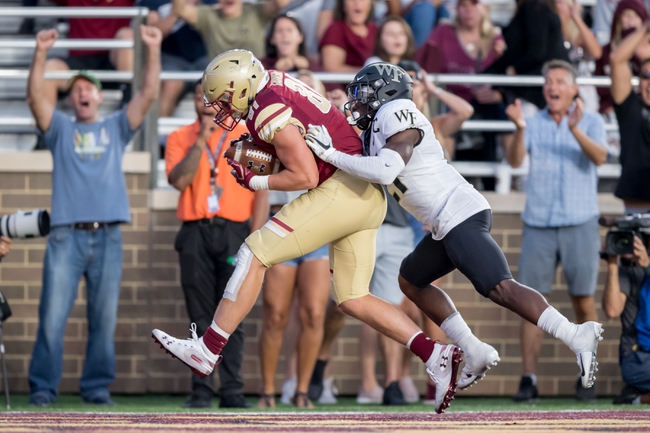 The Wake Forest Demon Deacons face off with the Syracuse Orange in Syracuse, New York, at Carrier Dome to closeout each team’s regular season. Wake Forest has had a relatively good season, standing at 8-3 currently and likely to get a decent bowl game for the team. The Demon Decans are coming off of a win over the Duke Blue Devils. Wake Forest

Wake Forest has one of the prolific offenses in the nation, ranking 17th in the nation in yards per game (464.5). Quarterback Jamie Newman and Wide Reciever Sage Surrett did have great chemistry this season, but Surrett’s injury against Clemson has left the Demon Deacons without their best receiver for the rest of the season.

Syracuse has not had a great 2019 campaign, leaving them with a 4-7 record and only a 1-6 record in the ACC Conference. The Orange fell to Louisville last week in a high scoring game that saw the Orange fight to make a comeback, but ultimately another loss for them on the season due to poor defensive play.

The Orange has not been able to keep teams out of the endzone, allowing an average of 30.7 points per game, which is third-worst in all of the ACC. Just three weeks ago, the Orange fired their defensive coordinator and linebacking coach. However, that did not prove to make a difference in the defense as of yet.

The spread for the game is Wake Forest -4. I do think that Wake Forest is the better team, and the records show that. I think the spread is far too low and I’m a bit surprised by it, I really like the Demon Deacons in this one. Final Score Prediction, Wake Forest wins and covers 27-16.