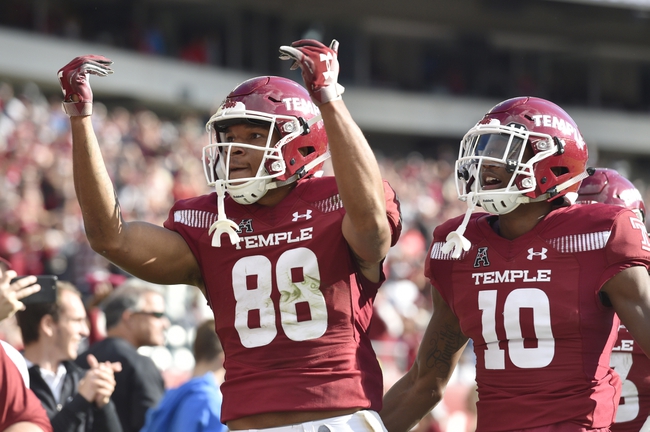 The Bucknell Bison are coming off a one-win season and will have a new head coach leading the way in Dave Cecchini, who won 17 games in five years coaching Valparaiso. The Bucknell Bison have lost five of their last six road games. Logan Bitikofer returns at quarterback after throwing for 1,050 yards and seven touchdowns, while running back Jared Cooper and wide receiver Brandon Sanders are back as the top options on offense. There’s no excuse for Bucknell not to improve on an average of 13.3 points per game last season. Defensively, Bucknell lost its top-three tacklers from last year, but Sam Chitty is back after 74 tackles and 3.5 sacks, while Simeon Page led the team with 4.5 sacks and had two forced fumbles. That tandem will have to step up this season while the rest of the defense takes time to fill some holes.

The Temple Owls have won seven or more games each of the last four years and have a new head coach in Rod Carey, who comes over from Northern Illinois. The Temple Owls have won each of their last four home games. Temple returns seven starters from an offense that averaged 34.9 points and 409.5 yards per game. Anthony Russo returns at QB after more than 2,500 passing yards and 14 touchdowns, while a trio of wide receivers in Branden Mack, Randle Jones and Isaiah Wright are back after combining for 12 touchdowns last year. Temple returns seven starters from a defense that allowed 27.1 points and 372.5 yards per game. Linebacker Shaun Bradley will lead the unit after 78 tackles and two interceptions. Quincy Roche returns after six sacks, and Benny Walls had three interceptions and five pass deflections. The Temple Owls have to like their chances to compete for an AAC crown this season with so much returning production.

The Bucknell Bison have enough returning production to where they should improve on last seasons efforts, but it's hard not to given what they went through. Even an improved team has you questioning just how good that actually is. The Temple Owls have a good head coach leading the way and are deep on both sides of the ball in returning production. A physical Temple team is going to make life hell for a Bucknell team that had trouble moving the ball last season. This game could get ugly. Give me Temple in a beatdown.