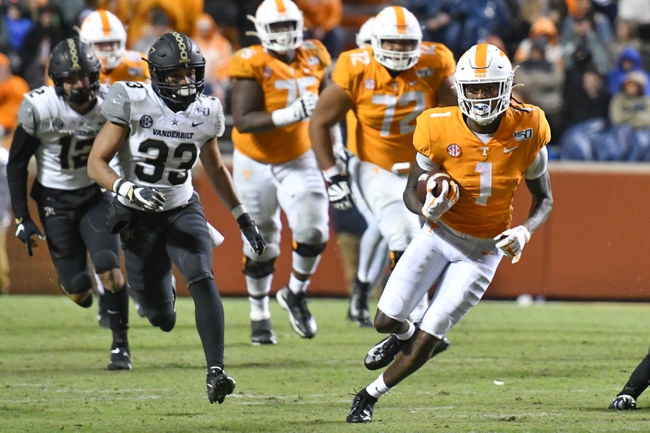 The Indiana Hoosiers square off against the Tennessee Volunteers in the Taxslayer Gator Bowl.  The Hoosiers are (8-4), after ending the regular season with a win over Purdue, 44-41.  The Volunteers are (7-5), coming off a 28-10 win over Vanderbilt.  Tennessee has won 5 in a row.

The Volunteers were led throughout the season by quarterback Jarrett Guarantano.  Guarantano passed for 1,937 yds on 134 completions, while throwing 16 touchdowns and 6 picks.  Jauan Jennings had a great year receiving, recording 942 yds on 57 receptions, while finding the end zone 8 times.  Ty Chandler added 620 yds rushing.  Defensively, Daniel Bituli led the team in tackles with 80, while Darrell Taylor registered 7 sacks.

Hoosiers are 6-2 ATS vs a team with a winning record.

Hoosiers are 1-5 ATS in their last 6 neutral site games.

The over is 5-1 in Hoosiers last 6 games overall.

Volunteers are 6-1 ATS in their last 7 games overall.

Volunteers are 6-2 ATS in their last 8 neutral site games.

The under is 4-0 in Volunteers last 4 games overall.

The Hoosiers averaged almost 9 more points per game than the Volunteers did on the season.  Tennessee has a very good defense and the defense may be the reason the Volunteers are able to snag a bowl win.  Indiana thrives offensively in the passing game, ranking 13th.  However, the Volunteers defensively rank 16th in allowing the fewest yds through the air.  Indiana averages nearly 309 yds passing, while Tennessee gives up just over 191 per game.  I'll side with Tennessee to get the job done, thanks to their defense.  Final score prediction, Tennessee will win and cover, 27-24.