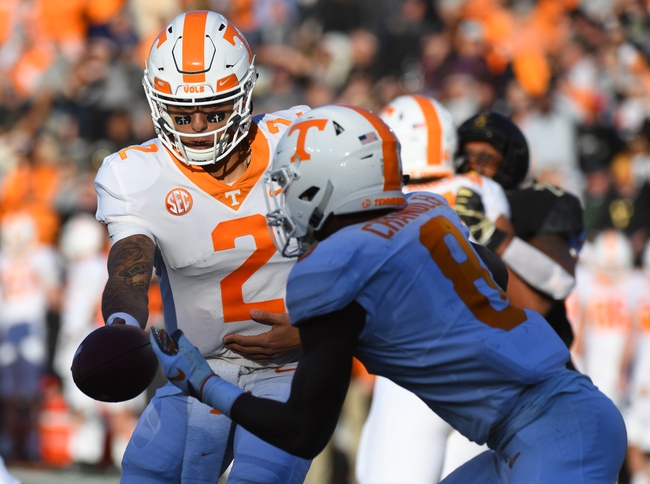 The BYU Cougars and the Tennessee Volunteers meet in a week 2 college football matchup from Neyland Stadium on Saturday night.

The BYU Cougars will look to bounce back from their season-opening loss at the hands of Utah by a final score of 30-12. Zach Wilson threw for 208 yards and 2 interceptions on 21 of 33 passing while rushing for 43 yards and Ty’Son Williams led the Cougars in rushing with 45 yards and a touchdown. Matt Bushman led BYU in receiving with 6 receptions for 62 yards while Aleva Hifo had 4 grabs for 40 yards. Defensively, Zayne Anderson had a team-high 6 tackles while BYU allowed Utah to rack up 368 yards of total offense in the game.

The Tennessee Volunteers will also look for a bounce back performance after arguably the upset of the opening weekend, falling to Georgia State in a shock 38-30 loss as 25-point favorites. Jarrett Guarantano threw for 311 yards, 2 touchdowns and an interception on 26 of 40 passing while Ty Chandler led the Vols on the ground with 48 yards and a touchdown on 6 carries. Jauan Jennings led Tennessee in receiving with 7 receptions for 108 yards and a touchdown while Dominick Wood-Anderson had 79 receiving yards and Eric Gray added 6 receptions for 51 yards. Marquez Callaway added 3 grabs for 46 yards and a touchdown as well in the defeat. Defensively, Latrell Bumphus had a fumble recovery and DeAndre Johnson and Shawn Shamburger each had a sack with Shamburger sharing the team lead with Henry To’o To’o with 4 tackles in the losing effort.

I can understand some people taking BYU and the free field goal after Tennessee dropped their season opener to Georgia State as it’s hard to get behind a team that let one slip away. However, that’s exactly why I’m backing the Vols here. Tennessee will have had a week to stew on that loss and I’m sure the coaching staff for the Vols will have let the team hear about it all week. Tennessee can’t be happy about being the talk of the college football world after week 1 and not in a good way and I see the Volunteers taking out some frustration on a BYU that’s simply in the wrong place at the wrong time. I think the Vols win this one by at least a touchdown, so I’ll lay the points with Tennessee in this one.