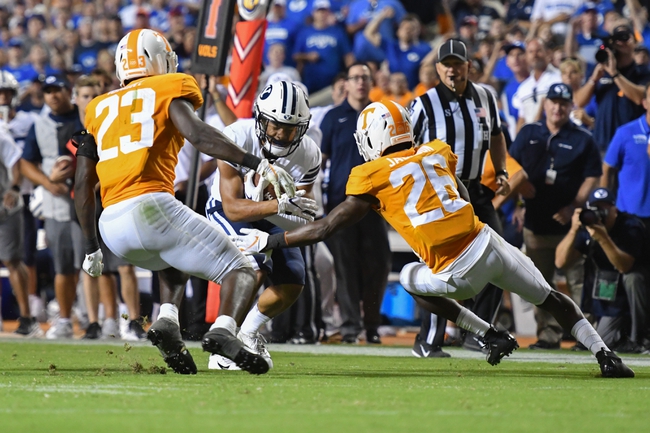 The Chattanooga Mocs and the Tennessee Volunteers meet in a week 3 college football matchup from Neyland Stadium on Saturday afternoon.

The Chattanooga Mocs will look to rebound from their first loss of the season, coming in the form of a 41-20 loss to Jacksonville State last time out. Nick Tiano has thrown for 403 yards, a touchdown and 2 interceptions on 31 of 55 passing for a 56.4% completion percentage. Ailym Ford leads the Mocs in rushing with 177 rushing yards and 2 touchdowns this season while Bryce Nunnelly has a team-high 14 receptions for 187 yards. As a team, Chattanooga is averaging 326.5 yards of total offense and 22 points per game this season.

The Tennessee Volunteers will be looking for their first win of the season after letting one slip away, falling to 0-2 with a 29-26 double overtime loss to BYU in their last outing. Jarrett Guarantano has thrown for 487 yards, 4 touchdowns and 2 interceptions on 43 of 68 passing for a 63.2% completion percentage. Ty Chandler leads Tennessee in rushing with 202 rushing yards and a touchdown while Eric Gray has 106 rushing yards. Jauan Jennings leads Tennessee’s receiving group with 11 catches for 196 yards and 3 touchdowns this season. Defensively, Theo Jackson, Will Ignont and Henry To’o To’o each have a team-high 15 tackles while LaTrell Bumphus has a pair of sacks for the Vols. As a team, Tennessee is averaging 411 yards of total offense and 28 points per game this season.

I said last time, that Tennessee would come out angry and beat the heck out of BYU, and for the second time in as many weeks, the Vols falter and disappoint. It’s probably time to admit that this Volunteers team is going to be the team that is the most disappointing team in the SEC this season. As far as this game goes, the Mocs just don’t have the firepower to hang here, but there’s no way I’m playing this game. If you absolutely have to, I’d probably lay the points with Tennessee but at this point I wouldn’t be at all surprised if the Vols lost this game too.