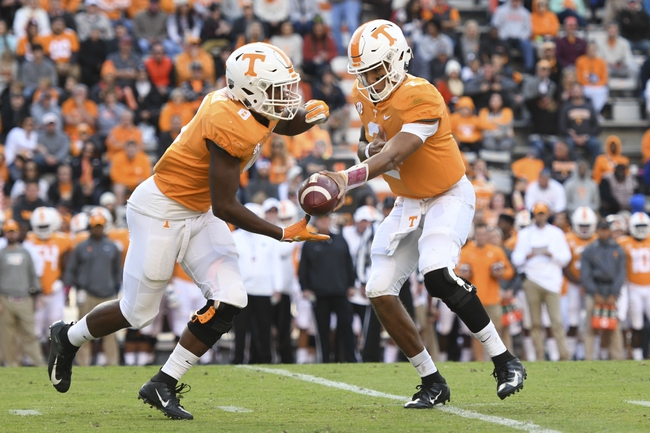 The Georgia State Panthers and the Tennessee Volunteers meet in week 1 college football action from Neyland Stadium in Knoxville, TN on Saturday afternoon.

The Georgia State Panthers will look to bounce back after a brutal 2018 season that saw the Panthers finish with a 2-10 record, including 1-7 in Sun Belt conference play to finish in the basement of the SEC East division, missing out on postseason with their worst mark since the 2014 season. Dan Ellington is back under center for the Panthers after throwing for 2,119 yards, 12 touchdowns and 5 interceptions on 59.6% passing while also leading Georgia State in rushing with 625 yards to go along with 5 rushing scores last season. Tra Barnett is expected to see a lot of the workload for Georgia State’s backfield after logging 5.1 yards per carry and a team-high 7 rushing TDs last year, while Seth Paige will be there to back Barnett up. Leading receiver Penny Hart is gone, but Cornelius McCoy and Devin Gentry return with some experience for the GSU receiving group. Defensively, the Panthers weren’t good, finishing bottom of the Sun Belt in total defense, but the plus side is seven starters are back as are nine of the top 11 tacklers for the Panthers. Terry Thomas, Akeem Smith and Donate Wilson are expected to lead GSU’s pass rush up front, while last year’s leading tackler Ed Curney anchors Georgia State’s linebacking group after racking up 81 tackles last season. Remy Lazarus was GSU’s second leading tackler and is back to lead a secondary along with Jaylon Jones and Quavian Whitereturn that’s hoping to generate more than six interceptions like the Panthers did last season. As a team, Georgia State averaged 378.3 yards of total offense and 23.9 points per game while allowing 489.6 yards of total offense and 37.4 points per game last season.

The Tennessee Volunteers will look to take another step in a positive direction after improving on 2017’s win total with a 5-7 record in 2018, including a 2-6 mark in SEC play. Jarrett Guarantano is back at QB after throwing for 1,907 yards, 12 touchdowns and just three interceptions last season Ty Chandler and Tim Jordan are also back as Tennessee’s 1-2 punch in the backfield, after combining for 1,152 yards and 7 rushing scores last season. The receiving corps is back as well, and is hoping to get full efforts from Marques Callaway, Josh Palmer and Jauan Jennings who are all big play threats for the Vols. Defensively, the Vols get 6 of their top 8 tacklers back, including leading tackler Daniel Bituli who recorded 79 tackles last season. Darrell Taylor will bring the edge rush after leading Tennessee with eight sacks as well as his 36 tackles last season while Nigel Warrior, Baylen Buchanan, Alontae Taylor and Bryce Thompson will make up the nucleus of the Tennessee secondary last season. As a team, Tennessee averaged 326.4 yards of total offense and 22.8 points per game while allowing 378.1 yards of total offense and 27.9 points per game last season.

The Vols aren’t necessarily the kind of team that you’d back with a thick line like this, especially when the Panthers are bringing back some pieces from last season. However, the Panthers were not good defensively last year, and lost their two non-conference road games by a combined score of 101-29 against NC State and Memphis. Tennessee on the other hand, allowed just six points in three non-conference games last season and while I’m not a fan of laying huge numbers like these, Tennessee brought back enough offensively and look like they’re going to be a team that’s going to take another step forward this year, so I’ll lay the points with Tennessee in what should be a decisive victory from start to finish.