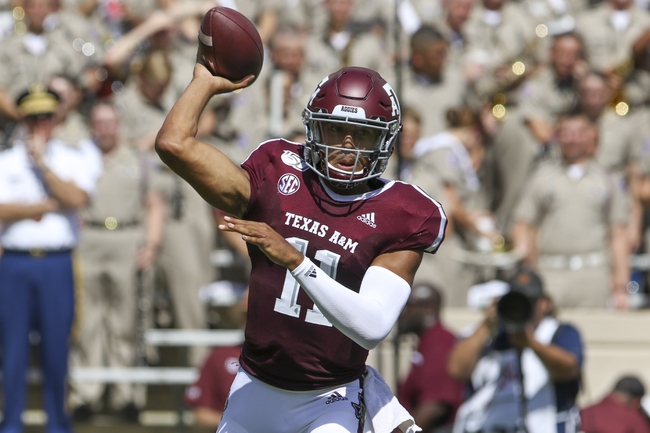 The Texas A&M Aggies and the Arkansas Razorbacks meet in a week 5 SEC conference college football matchup from AT&T Stadium on Saturday afternoon.

The Texas A&M Aggies will look to find some consistency after alternating wins and losses in each of their first four games of the season, currently sitting at 2-2 on the year after a 28-20 loss to Auburn in their last outing. Kellen Mond threw for 1,082 yards, 7 touchdowns and 3 interceptions on 64.4% passing while Isaiah Spiller leads the Aggies in rushing with 255 yards on the ground as well as a pair of TDs. Jhamon Ausbon leads A&M’s receiving group with 25 catches for 364 yards and 2 touchdowns while Guartney Davis has 16 catches for 226 yards and Kendrick Rodgers has 17 grabs for 200 yards this season. Defensively, Buddy Johnson leads Texas A&M with 20 total tackles while Anthony Hines has 17 total tackles with a team-high 13 solo tackles this season. As a team, Texas A&M is averaging 447.8 yards of total offense and 33.2 points per game while allowing 376.5 yards of total defense and 15.5 points per game against this season.

The Arkansas Razorbacks will look to bounce back and find some consistency of their own after a 31-24 upset loss to San Jose State in their last outing as 20-point favorites. Nick Starkel has thrown for 910 yards, 7 touchdowns and 6 interceptions on 60.5% passing while Rakeem Boyd leads the Hogs in rushing with 394 rushing yards and 3 touchdowns and Devwah Whaley has 138 rushing yards and 2 touchdowns this season. Trey Knox leads Arkansas’ receiving corps with 299 receiving yards and 2 TDs on 21 catches while Mike Woods has 17 grabs for 239 yards. Treylon Burks and Cheyenne O’Grady also join the 100-yard receiving club for the Hogs this year. Defensively, De’Jon Harris leads Arkansas with 28 total tackles while Kamren Curl has 27 total tackles including a team-high 20 solo tackles and a pair of sacks. Bumper Pool has 26 total tackles and Gabe Richardson has a team-high 2.5 sacks this season. As a team, Arkansas is averaging 440.8 yards of total offense and 29 points per game while allowing 411.5 yards of total defense and 27.2 points per game against this season.

This is a lot of points to lay on the surface with what’s technically a neutral site game. However, the game is still being hosted in Texas, and it’s less than 3 hours for the fans from College Station so you can expect a large number of Aggie fans in the house. Arkansas has put up a couple of clunkers lately, including an embarrassing loss at home to San Jose State, and I just don’t have much confidence in the Razorbacks against a stout Texas A&M defense. It’s a big line, but I think the Aggies will just be too much for Arkansas to handle, winning and covering the line in the process.