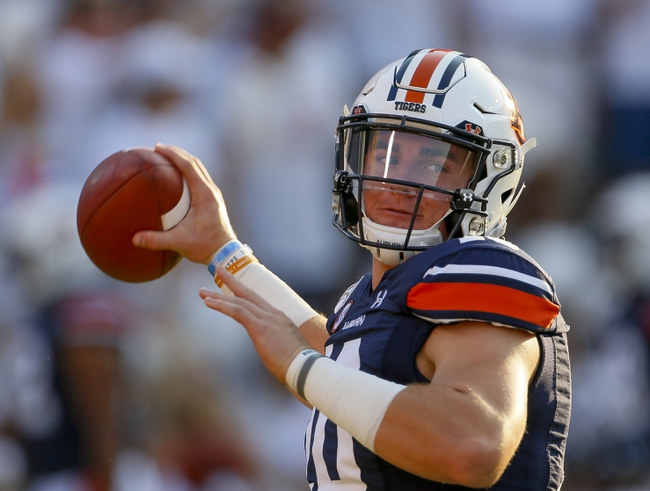 The Auburn Tigers and the Texas A&M Aggies meet in a week 4 SEC conference college football matchup from Kyle Field on Saturday afternoon.

The Auburn Tigers will look to build on their 3-0 start to the year after picking up a 55-16 win over Kent State in their last outing. Bo Nix has thrown for 545 yards, 4 touchdowns and 2 interceptions on 52.4% passing while JaTarvious Whitlow has rushed for 341 yards and 3 touchdowns this season. Joey Gatewood has rushed for 124 rushing yards, Kam Martin has 114 rushing yards and Shaun Shivers has 108 rushing yards this season. Eli Stove leads Auburn with 16 catches for 133 receiving yards while Will Hastings has 124 receiving yards this season. Defensively, Jeremiah Dinson has 27 tackles including 19 solo tackles while Daniel Thomas has 16 tackles and Marlon Davidson has 2.5 sacks this season. As a team, Auburn is averaging 465 yards of total offense and 35.3 points per game this season.

The Texas A&M Aggies will look to build up some momentum after a 62-3 pounding of Lamar in their last outing to improve to 2-1 on the year. Kellen Mond has thrown for 747 yards, 5 touchdowns and 3 interceptions on 64.9% passing while Isaiah Spiller has 246 rushing yards and 2 touchdowns and Jashaun Corbin has 137 rushing yards this season. Jhamon Ausbon has a team-high 17 receptions for 253 yards and 2 touchdowns while Kendrick Rogers has 155 receiving yards and Quartney Davis has 144 receiving yards this season. Defensively, Buddy Johnson leads the Aggies with 14 tackles while Roney Elam and Myles Jones each have a pair of interceptions this season. As a team, Texas A&M is averaging 466.7 yards of total offense and 37.7 points per game this season.

College Station is one of the harder road environments to go play in, not only in the SEC but in the entire country as Texas A&M just makes it tough from the opening kickoff, and a freshman QB like Bo Nix may have issues in that scenario. However, home field hasn’t been too effective between these two teams, as the road team’s covered 6 of the last 7 head-to-head meetings and Auburn has won each of their last three trips to Kyle Field outright. The Tigers are also battle tested from taking down Oregon in the opening week, so I’ll take a shot with Auburn and the points in a game that I see Auburn winning straight up.