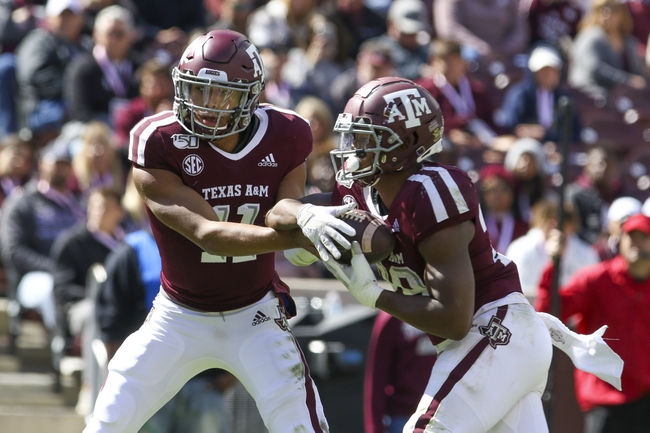 The South Carolina Gamecocks are set to visit Kyle Field in College Station, Texas for an SEC clash against the Texas A&M Aggies. The South Carolina Gamecocks come into this matchup with a 4-6 record, and they will be looking to rebound after dropping their recent home game against the Appalachian State Mountaineers, 20-15. Freshman QB Ryan Hilinski had a big game through the air as he contributed 325 yards, 1 TD, and 1 interception. Senior WR Bryan Edwards was the top target for Hilinksi and the Gamecocks as he hauled in 9 catches for 90 yards and a TD.

The South Carolina Gamecocks were solid on the defensive side of the ball against the Appalachian State Mountaineers as they held them to 13 points and a total of 202 yards of offense. Sophomore LB Ernest Jones led the way for the South Carolina defense with 10 tackles, 2 TFL, and 1 sack. Junior LB Sherrod Greene was able to get into the Appalachian State backfield a handful of times as he contributed 7 tackles and 3 TFL.

The Texas A&M Aggies come into this matchup with a 6-3 record, and they will be looking to continue their success after winning their recent home game against the UTSA Roadrunners, 45-14. Junior QB Kellen Mond had an efficient game through the air for Texas A&M as he connected on 16 of his 21 pass attempts for 211 yards and a TD. Freshman RB Isaiah Spiller had a big game on the ground for the Aggies as he ran for 217 yards and 3 TDs on 20 carries.

The Texas A&M Aggies were solid on the defensive side of the ball against the UTSA Roadrunners as they held them to 14 points and a total of 231 yards of offense. Junior DB Keldrick Carper led the way for the Texas A&M defense with 8 tackles, 1 TFL, and 1 sack. Freshman DL Demarvin Leal was able to get into the UTSA backfield a handful of times as he pitched in 6 tackles and 2 TFL. Freshman DB Erick Young had a productive game from the secondary for the Aggies as he hauled in the lone interception of the game.

The South Carolina Gamecocks were disappointing in their recent game against Appalachian State, and they will have problems on the road against a rested Texas A&M team. South Carolina was without their starting RB in their latest game which contributed to them only compiling 21 rushing yards, and Texas A&M will look to repeat some of the same success that Appalachian State had. The Aggies are good on the offensive side of the ball as they rank 28th in points scored, and they have a QB in Kellen Mond who has thrown 17 TDs compared to 6 interceptions as well as compiled 6 rushing TDs. The Aggies are coming off a bye week which will help them prepare for a team that has lost 3 of their last 4 games, and they are playing at home which is always a tough task for the road teams in the SEC.