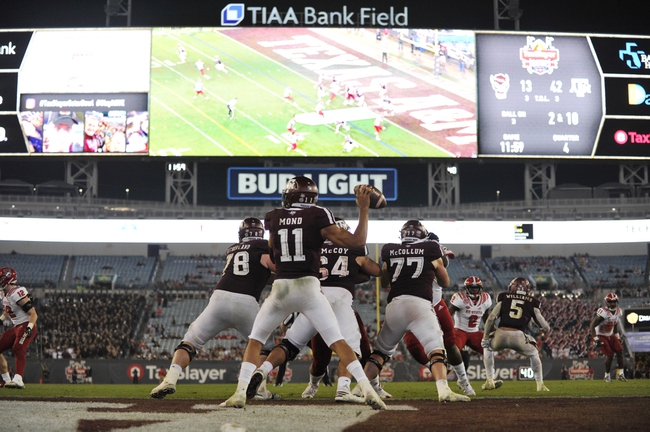 We have some college football action between a pair of Lone Star State schools as the Texas State Bobcats and the Texas A&M Aggies square off from Kyle Field in College Station, Texas.

The Texas State Bobcats will look to bounce back from a frustrating 2018 campaign that saw Texas State finish the season with a record of 3-9 with a 1-7 record in Sun Belt conference play. Jake Spavital takes charge of the Bobcats at head coach after Texas State parted ways with Everett Withers after posting a 7-28 record over the past three seasons. Tyler Vitt takes the reins as the starting QB for Texas State after splitting time with Willie Jones III last season. Jones transferred from the program, leaving Vitt in control after throwing for 1,159 yards, 7 touchdowns and 10 interceptions on 60.7% passing last season. The Bobcats remain unproven on the ground though, with the leading rusher from last season’s team being Anthony D. Taylor who rushed for just 312 yards on 86 attempts last season with 4 touchdowns as well. Jeremiah Haydel and Hutch White return as the leading receivers from last year’s squad, combining for 50 receptions for 624 yards and 6 touchdowns last season. Texas State will look to improve on an offense that ranked near the bottom of the FBS with just 329.5 yards of total offense and 19.8 points per game last season. The defense has a lot of leadership as well with senior Ishmael Davis on the line after leading the front with 22 solo tackles last season. Six Bobcat linebackers are also seniors this season including Bryan London II and Nikolas Daniels who combined for 100 tackles as part of a defense that allowed 383.9 yards of total offense and 27.7 points per game last season.

The Texas A&M Aggies will look to build on a solid first season under head coach Jimbo Fisher, a 2018 season that saw the Aggies finish with a 9-4 overall record, including 5-3 in SEC conference play and receiving an invite to the Gator Bowl, a bowl in which the Aggies won handily by a final score of 52-13. Kellen Mond returns under center for A&M, after throwing for 3,107 yards, 24 touchdowns and 9 interceptions last season on 57.3% passing. The Aggies receiving corps remains together for the most part, as Quartney Davis is back after logging 45 catches and 7 TDs last season along with Jhamon Ausbon who recorded 375 receiving yards for the Aggies. The big challenges for the Aggie offense will be replacing all-SEC running back Trayveon Williams who rushed for 1,760 yards and 18 touchdowns last season and all-American Jace Sternberger who caught 48 balls for 832 yards and 10 TDs last season, both of whom ended up in the NFL. Jashaun Corbin and UCF transfer Cordaman Richardson will look to be the answer in the Aggie backfield, while true freshman Baylor Cupp or sophomore Glenn Beal will be tasked to try to fill Sternberger’s void left in an offense that ranked 15th in the country in yardage and 19th in scoring with 471.8 yards of total offense and 36 points per game last season. Defensively, the front seven will look a lot different as Justin Madubuike, who logged 5.5 sacks and 10.5 TFL is the only returning starter in the front seven for Texas A&M this season. The Aggies will look to their depth on the defensive side of the ball to improve on a defense that was the 3rd best in the country last season against the run, allowing just 95.2 yards per game last season.

I’d like to give Texas State some benefit of the doubt as there may be some motivation to play well in a big game under their new head coach along with the fact that there’s going to be a learning curve for the new pieces in the Aggies’ revamped defense. However, the Aggies return a big part of their offense from last year, most importantly QB Kellen Mond who can be a gamechanger for the Aggies with the way he can spread the field. I probably wouldn’t touch the Aggies for a week or two to see where Texas A&M’s progress is at, meaning I’d probably leave this one alone, but if forced to pick, I think that Texas A&M is the better team here and should flex some muscle on the Bobcats, so I’d lay the points in this spot.