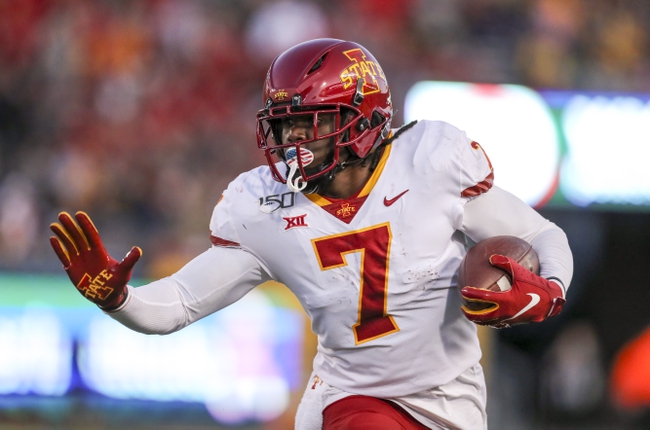 The Iowa State Cyclones are set to visit Jones AT&T Stadium in Lubbock, Texas for a Big 12 clash against the Texas Tech Red Raiders. The Iowa State Cyclones come into this matchup with a 4-2 record, and they will be looking to continue their success after winning their recent road game against the West Virginia Mountaineers, 38-14. QB Brock Prudy had a solid game through the air for the Cyclones as he connected on 19 of his 30 pass attempts for 229 yards, 1 TD, and 1 interception. RB Breece Hall had a big game on the ground for Iowa State as he ran for 132 yards and 3 TDs on 26 carries.

The Iowa State Cyclones were good on the defensive side of the ball against the West Virginia Mountaineers as they held them to 14 points and a total of 190 yards of offense. Sophomore LB Mike Rose led the way for the Iowa State defense with 9 tackles and half a sack. DE Zach Petersen and Matt Leo were able to get into the Mountaineers backfield a handful of times as they combined for 4 TFL. DB Braxton Lewis contributed the lone interception of the game for the Cyclones.

The Texas Tech Red Raiders come into this matchup with a 3-3 record, and they will be looking to rebound after dropping their recent road game against the Baylor Bears, 33-30 in 2OT. QB Jett Duffey had an inconsistent game through the air for the Red Raiders as he threw for 362 yards, 1 TD, and 2 interceptions. Freshman RB Sarodorick Thompson had a big game on the ground for Texas Tech as he ran for 153 yards and 2 TDs on 28 carries.

The Texas Tech Red Raiders struggled on the defensive side of the ball against the Baylor Bears as they allowed them to score 33 points and rack up a total of 525 yards of offense. DB Douglas Coleman III led the way for the Texas Tech defense as he contributed 8 tackles and an interception. Senior DL Broderick Washington Jr. was able to cause havoc on the Baylor offense as he racked up 5 tackles, 1 sack, and 1 TFL. LB Evan Rambo and CB Ja’Marcus Ingram were also able to add in interceptions for the Red Raiders.

The Iowa State Cyclones have put together some good performances on the offensive side of the ball as of recent as they have combined for 87 points in two games, and they should have similar success here. The Cyclones have an advantage at QB with Brock Purdy as he has thrown for 1807 yards, 11 TDs, and 3 interceptions while also adding in 6 rushing TDs. The Red Raiders have struggled on the defensive side of the ball this season as they are allowing an average of 27.3 PPG, and that isn’t a recipe for success against a high-powered offense like Iowa State. The Cyclones will move to 5-2 with a decisive win in this conference clash.