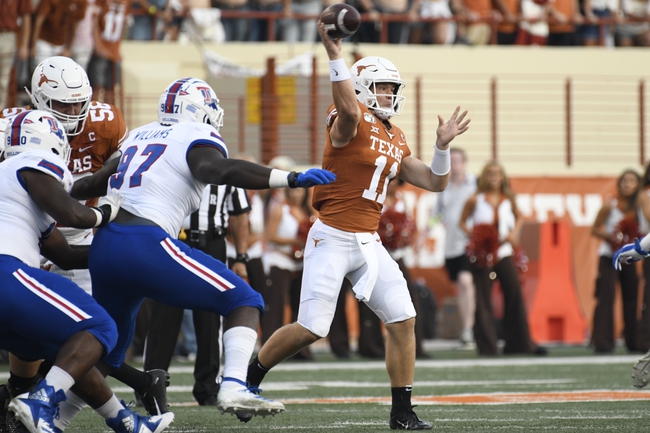 The LSU Tigers will look to build on a strong showing in their season opener, taking down Georgia Southern in a 55-3 rout. Joe Burrow threw for 278 yards and 5 touchdowns on 23 of 27 passing while Clyde Edwards-Helaire rushed for 45 yards and a touchdown. Lanard Fournette had a rushing score of his own while Justin Jefferson led LSU’s receiving corps with 5 receptions for 87 yards and a touchdown. Thaddeus Moss had 61 receiving yards while Terrace Marshall Jr. had 3 touchdown grabs and Ja’Marr Chase added a TD reception of his own in the win. Defensively, Grant Delpit had a fumble recovery and Neil Farrell Jr. and Rashard Lawrence each had a sack while Jacob Phillips and JaCoby Stevens each had a team-high 3 tackles in the victory.

The Texas Longhorns will look to build on their own solid effort in their season opener, beating down on Louisiana Tech by a final score of 45-14. Sam Ehlinger threw for 276 yards and 4 touchdowns on 28 of 38 passing while Keaontay Ingram had 78 rushing yards and a touchdown on 11 carries. Casey Thompson also had a rushing score while Colin Johnson and Brennan Eagles each had 59 receiving yards and a touchdown with Johnson logging 4 receptions while Eagles had a pair of touchdown grabs. Devin Duvernay led Texas’ receiving group with 9 catches for 55 yards and a touchdown as well in the victory. Defensively, DeMarvion Overshown had a sack and an interception while Joseph Ossai also had a pick and Brandon Jones added a fumble recovery in the win while Jeffrey McCulloch and Caden Sterns each had a team-high 6 tackles in the victory.

LSU was as good as advertised in the opener but in all honesty, so was Texas. If this game was on a neutral field I’d understand LSU being favored, and I can kind of understand it in a true road game as LSU has been solid ATS on the road for some time now. However, Texas is starting to look like the old Longhorn programs we’ve become accustomed to seeing over the years, and there’s a real level of excitement and optimism going on in Austin with Ehlinger leading the charge. Texas boasts one of the harder road environments to go on the road and compete in let alone come out with an outright victory. I think this will be a tight affair throughout, and I’ll want the points in my back pocket so I’ll side with Texas and the free points here.