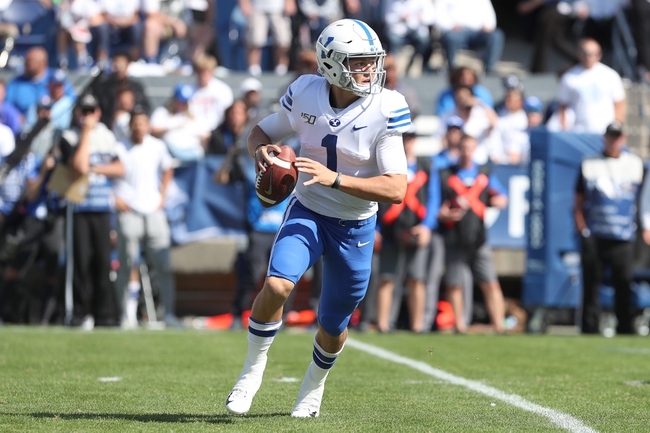 The BYU Cougars and the Toledo Rockets meet in a week 5 college football matchup from the Glass Bowl on Saturday afternoon.

The BYU Cougars will look to rebound after falling back to 2-2 on the year after a 45-19 beatdown loss at the hands of Washington in their last outing. Zach Wilson has thrown for 997 yards, 3 touchdowns and 3 interceptions on 62.8% passing while Ty’Son Williams leads the Cougars in rushing with 264 rushing yards and 3 touchdowns this season. Micah Simon leads BYU in receiving with 232 receiving yards and 15 catches while Matt Bushman also has 15 grabs for 208 yards and Aleva Hifo also added 15 catches for 172 yards this season. Gunner Romney also has 118 receiving yards for the Cougars this year. Defensively, Kavika Fonua leads BYU with 34 total tackles, including 17 solo tackles while Dayan Ghanwoloku has 26 total tackles, including a team-high 20 solo tackles this season. As a team, BYU is averaging 356.2 yards of total offense and 22.5 points per game while allowing 430.2 yards of total defense and 32 points per game against this season.

The Toledo Rockets will look to build on back-to-back victories after a 41-35 road win over Colorado State in their last outing. Mitchell Guadagni has thrown for 499 yards and 4 touchdowns while Bryant Koback leads the Rockets in rushing with 363 rushing yards and 5 touchdowns. Guadagni has 199 rushing yards while Shakif Seymour has 104 rushing yards of his own. Bryce Mitchell leads Toledo with 194 receiving yards while Danzel-McKinley-Lewis has 172 receiving yards and Drew Rosi has 106 receiving yards this year. Defensively, Saeed Holt leads the Rockets with 26 total tackles, while Jordan Fisher is right behind with 25 total tackles and Tycen Anderson is 3rd with 23 total tackles this season. As a team, Toledo is averaging 477.3 yards of total offense and 36.7 points per game while allowing 482.3 yards of total defense and 24.3 points per game against this season.

Getting BYU and a low line is tempting as the Cougars have provided some solid value lately, but the Cougars were just thrashed at home against Washington, and while the Cougars have pulled out a couple of solid wins, they’re still being outscored by almost 10 points per game and have allowed at least 29 points in all four of their games so far this season. Toledo doesn’t always do it pretty, but the Rockets can pile on the points in a hurry when they need to, and at home, this isn’t an ideal spot for BYU to be in, so I’ll take the free point in a game I see Toledo winning outright.