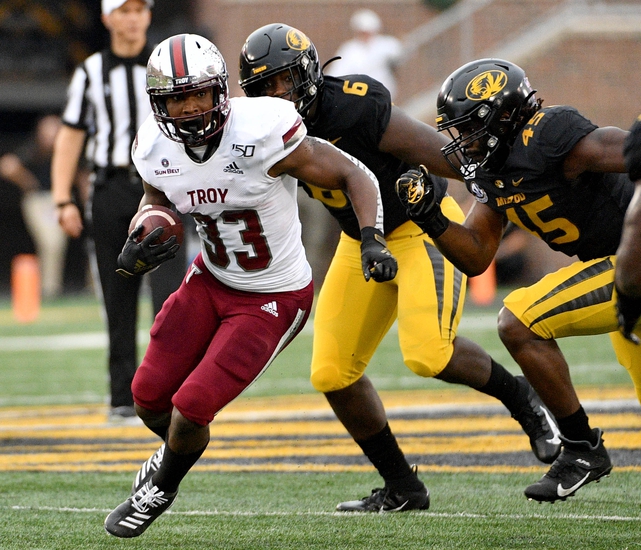 The South Alabama Jaguars will head to Veterans Memorial Stadium in Troy, Ala. for a Wednesday night Sun Belt Conference showdown for the “Battle for the Belt.”

This game should turn out to be very interesting against the spread. Even though it is a new rivalry, these two teams, who have played annually each year since 2012, have had some fascinating results already. The road team has won outright each of the past four years and South Alabama has actually gone 3-1 in that time, even though Troy has been the team in the national headlines with wins over LSU and Nebraska over the past two seasons as well as a 6-point loss to Clemson in South Carolina three years ago.

The best of those road teams winning outright over the past four years is the Jaguars’ 19-8 win that last time they travelled to Troy. It was the Trojans’ lone conference loss that season on the way to their sixth Sun Belt Conference title, but it was also only the second loss on the season for Troy -- the other coming in the season opener against Boise State. It needs to be made clear, however, that the loss came one week after the Trojans’ thrilling 24-21 win over LSU in Baton Rouge. Can anyone say letdown after the big win?

A question mark in this one comes at quarterback with Troy senior Kaleb Barker, who left the 42-10 loss at Missouri at some point with some sort of an injury. The reason for the vague report is because that is all that Troy head coach Chip Lindsey was willing to tell reporters in his weekly press conference. In that press conference Lindsey refused to mention what the injury was or when it took place, simply saying “I definitely think he’s probably questionable. We hope he’ll be available, but we don’t know yet. It’s too early to tell.” That doesn’t sound promising for a player coming off of a bye week heading into a Wednesday night game.

One thing is clear, whether it is Barker at quarterback or not, is that Troy can score. Against non-Power 5 schools this season, the Trojans are scoring more than 40 points per game. And while Troy’s defense hasn’t been impressive, would it be more likely that Southern Alabama would be considered more similar to Arkansas State or Akron? Probably Akron, as neither team has a win over an FBS school this year. What did Troy do to Akron earlier this year? Win 35-7.

Rivalry or not, Troy’s offense is a little too good and Southern Alabama’s offense isn’t quite good enough, even though Troy’s defense really isn’t the best. It’s tough to give up more than two touchdowns on a rivalry game, but that’s the only real way to give much credence to the Jaguars. Take Troy minus the points.