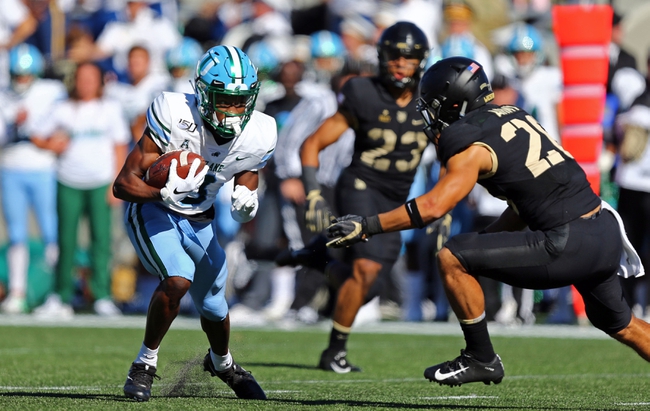 The UCF Knights are set to visit Yulman Stadium in New Orleans, Louisiana for an AAC clash against the Tulane Green Wave. The UCF Knights come into this matchup with a 7-3 record, and they will be looking to rebound after dropping their recent road game against the Tulsa Golden Hurricanes, 34-31. Freshman QB Dillon Gabriel struggled to find a rhythm through the air for the Knights as he connected on 23 of his 38 pass attempts for 290 yards, 1 TD, and 2 interceptions. The ground attack was strong for the Knights as senior RB Adrian Killins Jr. ran for 95 yards and a TD while junior RB Otis Anderson pitched in 66 yards and a TD.

The UCF Knights struggled on the defensive side of the ball against the Tulsa Golden Hurricanes as they allowed them to score 34 points and rack up a total of 353 yards of offense. Senior LB Nate Evans led the way for the UCF defense with 14 tackles and 1 TFL. Junior DL Kenny Turnier had a big game for the Knights as he contributed 10 tackles, 2.5 TFL, and 1 sack. Sophomore LB Eriq Gilyard was productive for the unit as he tallied 12 tackles.

The Tulane Green Wave come into this matchup with a 6-4 record, and they will be looking to rebound after dropping their recent road game against the Temple Owls, 29-21. Senior QB Justin McMillian struggled to get any offense generated through the air for Tulane as he connected on 11 of his 27 pass attempts for 103 yards and 1 interception. Senior RB Darius Bradwell was bottled up by the Temple defense as he only complied 63 yards and a TD on 18 carries.

The Tulane Green Wave struggled on the defensive side of the ball against the Temple Owls as they allowed them to score 29 points and rack up a total of 402 yards of offense. Senior safety P.J. Hall led the way for the Tulane defense with 9 tackles and half a TFL. The secondary had a productive game for the Green Wave as senior CB Thakarius Keyes pitched in 5 tackles and a pass deflection while junior CB Jaylon Monroe hauled in the lone interception of the game.

The Tulane Green Wave have struggled as of recent as they have dropped 3 of their last 4 games, and they will have one of their toughest tasks yet with the explosive UCF Knights. UCF has the 7th ranked scoring offense in college football, and freshman QB Dillon Gabriel has started to gain confidence as he has thrown 24 TDs compared to 7 interceptions. The Knights have the ability to run the ball with Killins and Anderson, but their biggest weapon is WR Gabriel Davis who is one of the best in college football with 1060 yards and 10 TDs. Tulane has been one-dimensional on the offensive side of the ball this season as they depend on their ground game, but UCF has been very good against the run as they are holding opponents to an average of 138.4 rushing yards per game. Expect the Knights to get back on the winning track with a nice road win here.