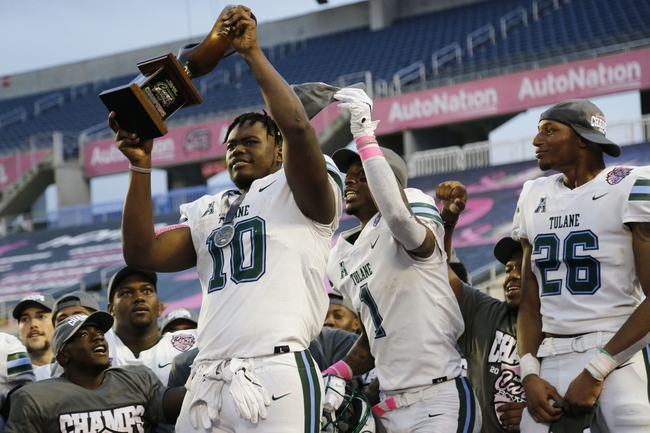 The Florida International Panthers have improved their win total over each of the last three years and are chasing a potential C-USA title this season in the third season under coach Butch Davis. The Florida International Panthers have won their last three road games. James Morgan returns at quarterback after throwing for 2,700 yards and 26 touchdowns, while explosive running back D'Vonte Price gets an expanded role and five of the top-six receivers are back as well. The FIU Panthers could easily be a top-25 offense in the country this season with all the returning production. Defensively, FIU returns seven of its top-nine tacklers, which includes leading tackler Sage Lewis and sack leader Teair Tart. With 16 returning starters overall, it’s fair to say expectations have never been higher for the Florida International Panthers.

The Tulane Green Wave are coming off a seven-win season, which was the most since 2013, and they’re also coming off their first bowl win since 2002. The Tulane Green Wave have won four of their last five home games. Tulane should like its chances to build on that with eight starters returning from a quality defense, which includes double-digit sack artist Patrick Johnson and star linebacker Marvin Moody. Tulane could easily have the best defense in the AAC this season. Offensively, Darius Bradwell is back after topping 1,000 rushing yards and leading receiver Darnell Mooney returns after nearly reaching the 1,000-yard receiving mark. Tulane also has experience at QB with Justin McMillan getting another year, and he’ll make this team much more balanced if he improves his completion percentage. The Tulane Green Wave have a chance at double-digit wins for the first time since 1998.

This is easily one of the better games of opening weekend, as it's two teams that have their eyes on conference titles and are good enough to compete that task. The Florida International Panthers have come leaps and bounds under Davis and are probably the better coached team. However, Tulane is loaded on both sides of the ball and has to have the edge at home. I feel weird turning down free points wit ha really good FIU side, but the Tulane Green Wave are going to surprise a lot of people this year and will be out to make an early statement. I'll eat the small chalk. Don't sleep on Tulane. I'm warning you now.