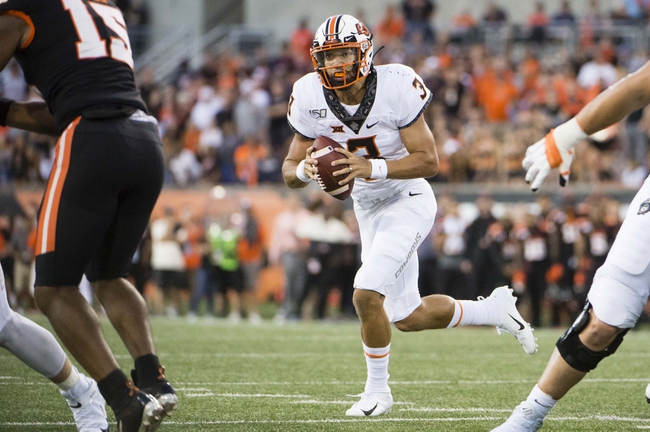 The Oklahoma State Cowboys and the Tulsa Golden Hurricane meet in a week 3 college football matchup from Skelly Field at H.A. Chapman Stadium on Saturday afternoon.

The Oklahoma State Cowboys will look to stay unbeaten and improve on their 2-0 start after a 56-14 win over McNeese State last time out. Spencer Sanders has thrown for 453 yards and 6 touchdowns on 31 of 42 passing for a 73.8% completion percentage while Chuba Hubbard has a team-high 265 rushing yards and 4 touchdowns. The aforementioned Sanders has also rushed for 160 yards while Tylan Wallace leads OK State in receiving with 10 catches for 272 yards and 5 touchdowns this season. As a team, Oklahoma State is averaging 567.5 yards of total offense and 54 points per game this season.

The Tulsa Golden Hurricane will look to build on their first win of the season after improving to 1-1 with a 34-16 win over San Jose State last time out. Zach Smith has thrown for 436 yards, 2 touchdowns and an interception on 37 of 55 passing for a 67.3% completion percentage while Shamari Brooks has rushed for a team-high 140 yards. Sam Crawford Jr. leads Tulsa’s receiving group with 14 catches for 186 yards while Keylon Stokes has 100 receiving yards as well. Defensively, Cooper Edmiston leads Tulsa with 19 tackles and Manny Bunch has 16 tackles while Trevis Gipson has a pair of sacks this season. As a team, Tulsa is averaging 309.5 yards of total offense and 20.5 points per game this season.

These in-state rivalry games can always be tricky, and the home team’s had a lot of success in this matchup, so the points with Tulsa could be worth a look. However, the Golden Hurricane were manhandled in their opener against Michigan State, and while this is Tulsa’s home opener so the fans will be eager to make some noise, the Cowboys are simply the better team and are in another class offensively. Oklahoma State has shown an ability to score points when they want to, so I’ll lay the points with the Cowboys in what should be a comfortable Oklahoma State win.