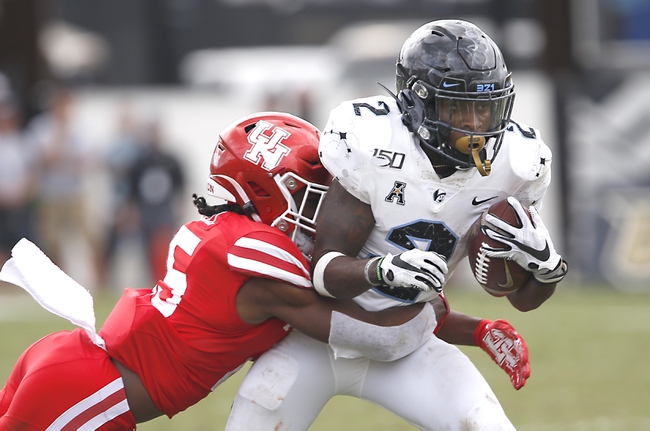 The USF Bulls are set to visit Spectrum Stadium in Orlando, Florida for an AAC clash against the UCF Knights. The USF Bulls come into this matchup with a 4-7 record, and they will be looking to rebound after dropping their recent home game against the Memphis Tigers, 49-10. Freshman QB Jordan McCloud struggled to get much offense generated through the air for USF as he connected on 5 of his 14 pass attempts for 45 yards. Freshman RB Kelley Joiner Jr. had a big game on the ground for the Bulls as he ran for 115 yards on 13 carries.

The USF Bulls struggled on the defensive side of the ball against the Memphis Tigers as they allowed them to score 49 points and rack up a total of 560 yards of offense. Sophomore LB Andrew Mims led the way for the USF defense with 13 tackles, 1 TFL, and 1 sack. The secondary had a productive game for the Bulls as freshman DB DaQuan Evans contributed 5 tackles and 1 interception while junior DB KJ Sails hauled in an interception.

The UCF Knights come into this matchup with an 8-3 record, and they will be looking to continue their success after winning their recent road game against the Tulane Green Wave, 34-31. Freshman QB Dillon Gabriel had a big game through the air for UCF as he connected on 24 of his 46 pass attempts for 317 yards and a TD. Junior WR Marlon Williams was the top target for Gabriel and the Knights as he hauled in 9 catches for 119 yards and a TD.

The UCF Knights struggled on the defensive side of the ball against the Tulane Green Wave as they allowed them to score 31 points and rack up a total of 402 yards of offense. Junior DB Richie Grant led the way for the UCF defense with 12 tackles and 1 TFL. The LBs had a productive game for the Knights as junior LB Eric Mitchell contributed 8 tackles, 2 TFL, and 1 sack while senior LB Nate Evans pitched in 7 tackles, 2 pass deflections, and 1 TFL.

The USF Bulls have been awful this season as they have been unable to generate much offense, but their biggest concern in this game will be stopping the UCF offense. The Knights are currently one of the top-scoring teams in college football as they are scoring an average of 43.8 PPG, and freshman QB Dillon Gabriel has looked much better as the season has gone on. The USF Bulls are only scoring an average of 22.1 PPG, and their freshman QB struggled against Memphis as he only completed 5 of his 14 pass attempts. The Bulls may also be without their leading rusher for this game as his status is in the air after missing their last game, and that will be another big blow for Charlie Strong and USF.