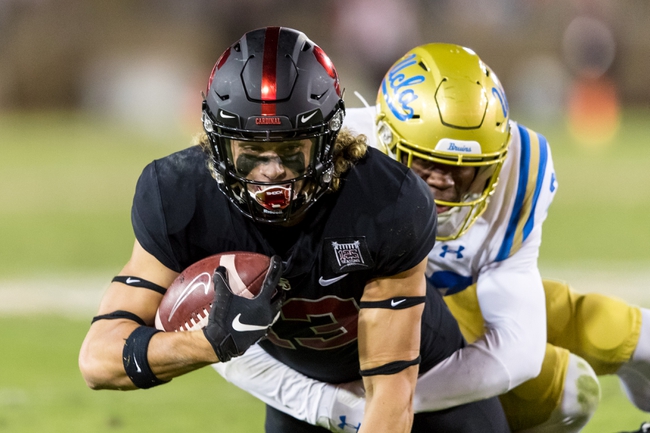 On Saturday, the Arizona State Sun Devils visit the Rose Bowl for a match up with the UCLA Bruins.  The Sun Devils come into this game with a 5-2 record, but are coming off of a loss to Utah.  In the game against the Utes, quarterback Jayden Daniels was awful, only completing 4 of 18 passes for a total of 25 yards, no touchdowns and 1 interception.  The Sun Devils did get their running game going as running back Eno Benjamin carried the ball 15 times for 104 yards.  Despite the effort on the ground by Benjamin, the Sun Devils were kept out of the end zone the entire game and lost by a score of 21-3.

Despite the poor showing by the Arizona State offense in their game against Utah, they are averaging 25.3 points per game and 402.7 total yards per game on the season.  On the year, Daniels has thrown for 1,610 yards with 8 touchdowns and only 1 interception.  The defense for Arizona State has been decent, although, they are allowing 354.5 yards per game, they have only been giving up 17.7 points per game.

UCLA comes into the game on Saturday after a 34-16 win against Stanford, which pushed their record to 2-5.  Quarterback Dorian Thompson-Robinson had a good day through the air, completing 21 of 34 passes for 192 yards with 2 touchdowns against 1 interception.  Kyle Phillips caught both of Thompson-Robinson passing touchdowns on his way to a 10 catch, 100 yard day. UCLA running back Joshua Kelley had a big day on the ground carrying the ball 18 times for 176 yards and a touchdown.  The most surprising performance of the day came from the UCLA defense, who held the Stanford Cardinal to 16 points on the day, in what was their best defensive performance of the year.

UCLA continues to rebuild in the Chip Kelly era.  While their offense has scored 27.3 points per game, their defense has given up 34.6 points on average.  The UCLA defense has really struggled defending the pass, giving up an average of 312.4 passing yards per game.  UCLA will attempt to shut down Arizona State quarterback Jayden Daniels much like they did Stanford quarterback Jack West this past week.

My pick- I have to go with Arizona State on this one as I believe that a strong UCLA defense was a one time showing.  Daniels will have a bounce back game after struggling last week against a tough Utah defense.  Although UCLA will score points against the Arizona State defense, it won’t be enough to cover what their own defense gives up.  Arizona State wins 35-31 and covers the spread.