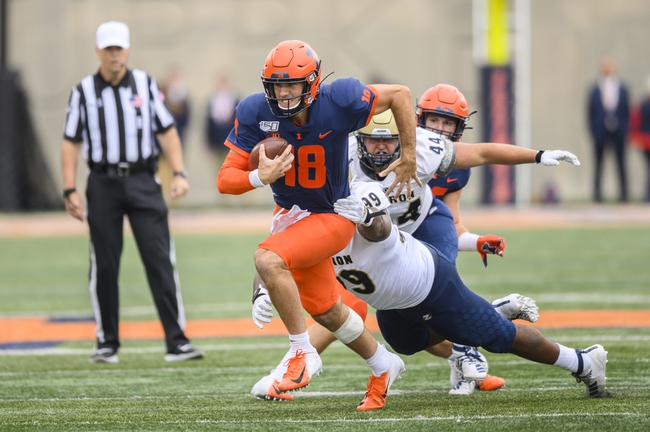 The Illinois Fighting Illini and the UConn Huskies meet in a week 2 college football matchup from Pratt & Whitney Stadium at Rentschler Field on Saturday afternoon.

The Illinois Fighting Illini will look to build some momentum after starting the year with a 42-3 rout of Akron last time out. Brandon Peters threw for 163 yards and 3 touchdowns on 14 of 23 passing while Mike Epstein rushed for a team-high 45 yards on 8 carries. Ra’Von Bonner, Reggie Corbin and the aforementioned Peters each had at least 36 rushing yards and a touchdown for the Illini in the win. Ricky Smalling had a team-high 4 receptions for 54 receiving yards while Trevon Sidney, Justice Williams and Daniel Barker each added a receiving TD in the win. Defensively, the Illini combined for 6 sacks while Jake Hansen recorded an interception, a fumble recovery and a team-high 5 tackles.

The UConn Huskies will look to build some steam of their own after matching last season’s win total with a season-opening 24=21 win over Wagner. Mike Beaudry threw for 158 yards and an interception on 14 of 21 passing while rushing for a touchdown of his own. Kevin Mensah had 144 rushing yards and a touchdown while Art Thompkins added 91 rushing yards and a rushing score of his own. Matt Drayton led UConn’s receiving corps with 5 grabs for 51 yards while Heron Maurisseau had 4 grabs for 33 receiving yards. Defensively, Lwal Uguak had 2 of UConn’s 3 sacks as a team in the win while Diamond Harrell led UConn with 5 tackles in the winning effort.

Okay call me crazy. I know Illinois is probably the better team and UConn barely scraped by Wagner, but something feels off about laying three touchdowns with an Illinois team that hasn’t won a road non-conference game since 2007. I’m sure that will end here as UConn isn’t very good, but asking to lay this many points just doesn’t sound like a good idea. I wouldn’t be surprised if Illinois stepped all over UConn like lots of other teams have, but I’m not comfortable making that assumption, so I’ll take a shot with the Huskies and the points.