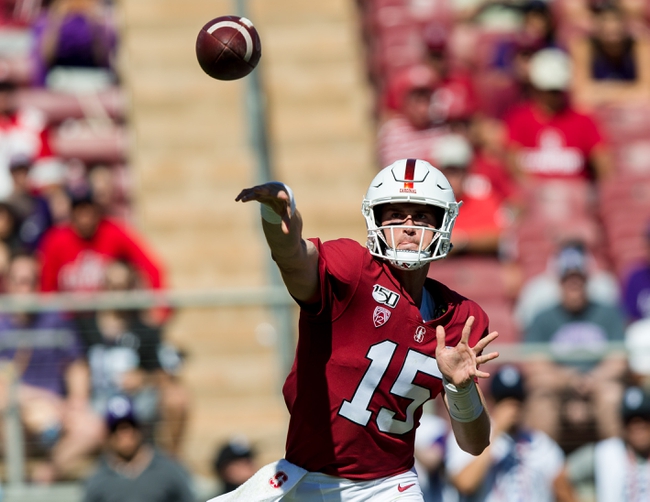 The Stanford Cardinal and the USC Trojans meet in a Pac-12 conference college football matchup from the Los Angeles Memorial Coliseum on Saturday night.

The Stanford Cardinal will look to build on a season-opening 17-7 win over Northwestern in their last outing. K.J. Costello threw for 152 yards and a touchdown on 16 of 20 passing before leaving the game due to injury, making way for Davis Mills who threw for 81 yards on 7 of 14 passing. Cameron Scarlett led Stanford with 97 rushing yards while Connor Wedington had a team-high 7 receptions for 69 yards and Michael Wilson added 6 receptions for 47 yards and a touchdown. Defensively, Jordan Fox recovered a fumble in the end zone for a touchdown the Cardinal combined for 3 sacks and 2 interceptions, including one from Paulson Adebo who led Stanford with 4 tackles while Obi Eboh added 4 tackles of his own.

The USC Trojans will look to build on their season-opening 31-23 win over Fresno State last time out. JT Daniels threw for 215 yards, a touchdown and an interception before leaving the game due to injury, which we would later find out is a torn ACL and meniscus, resulting in Daniels being lost for the rest of the season. Kedon Slovis threw for 57 yards and an interception on 6 of 9 passing in relief while Vavae Malepeai had 134 rushing yards and a touchdown and Stephen Carr added 56 rushing yards and a touchdown of his own. Tyler Vaughns led USC with 11 catches for 150 yards while Carr had a 2nd touchdown through the air with 43 yards on 6 receptions. Defensively, the Trojans combined for 3 sacks, including one from Isaiah Pola-Mao who also added an interception while Marlon Tuipulotu had a fumble recovery and John Houston Jr. added 7 tackles.

Both of these teams have major question marks at quarterback right now, so it’s a hard game to pick. However, I’m not laying points with USC, even at home, knowing that their backup is taking the reins for the rest of the season. At least Stanford has the possibility of Costello coming back in and even if he doesn’t, I still have more faith in Stanford and their depth and the coaching staff than I do USC, so I’ll take the free field goal with Stanford here.