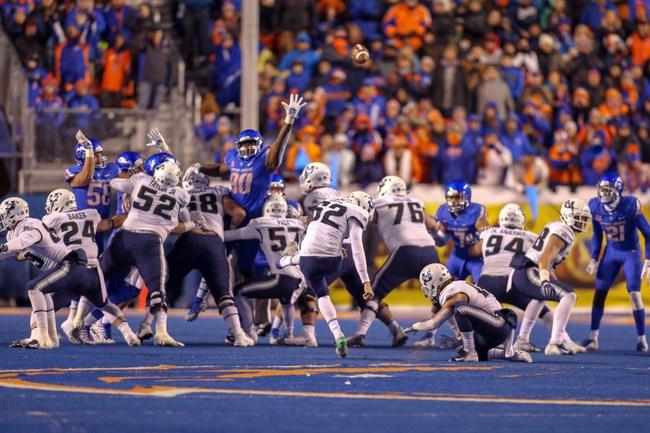 The 21st ranked Boise State Broncos are on the road for a Mountain West matchup with the Utah State Aggies.  The Broncos are (9-1), having just beat New Mexico 42-9.  The Aggies are (6-4) on the season and are coming off a 26-21 home win over Wyoming.

In the win over New Mexico, the Broncos were guided by quarterback Jaylon Henderson.  Henderson was 15 of 28 passing for 292 yds, while throwing 3 touchdowns and 1 interception.  Boise State got out to a quick lead and never looked back.  The Broncos led 28-0 at the end of the first quarter.  The Broncos did not give up a touchdown to New Mexico until less then 4 minutes to go in the game.  Boise State finished with 509 yds of total offense, while only allowing 292.

In the Aggies win over Wyoming, Utah State was guided by Jordan Love.  Love regrouped after throwing an early pick 6.  Love finished the game, completing 19 of 29 for 282 yds, throwing 2 touchdowns and 2 picks.  The Aggies had kicker Dominic Eberle to thank for the win as well.  Eberle made 4 of his 5 field goals and both extra points.  The Aggies out gained Wyoming 422 to 343 en route to the win.

Broncos are 1-3-1 ATS in their last 5 games following a ATS win.

The under is 8-2 in Broncos last 10 conference games.

The under is 7-1 in Aggies last 8 conference games.

Both teams are 6-4 ATS this year, but this is a big game for both squads.  Boise State is 6-0 in conference play atop the Mountain West.  The Aggies are 5-1 in conference play and will be trying to give Boise State their first loss.  You can throw the 21 ranking out the window here.  This is a game that could decide who wins the Mountain West, the Aggies will have a sell out crowd and there will be tons of energy flowing through the stadium.  This will be a close game but Boise State will in the end.  Final score prediction, Boise State will but Utah State covers, 31-27.