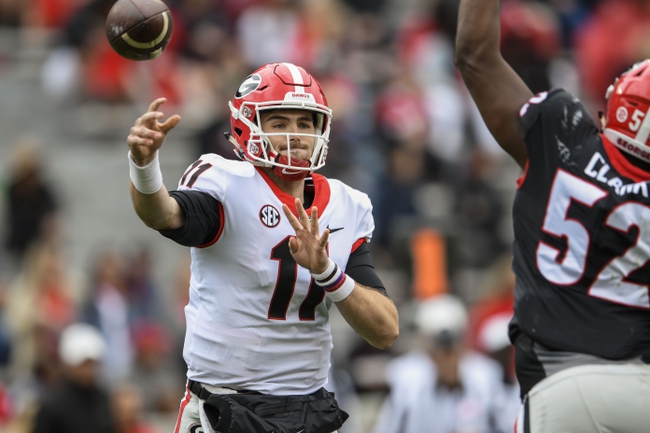 The Georgia Bulldogs and the Vanderbilt Commodores meet in an early season SEC conference tilt in college football action from Vanderbilt Stadium on Saturday night.

The Georgia Bulldogs will look to finally have that breakthrough season after falling just short in 2018 once again, finishing the year with an overall record of 11-3, including 7-1 in SEC conference play to win the SEC East crown and book a spot in the SEC championship game, a game that Georgia lost to Alabama by a final score of 35-28. The Bulldogs also received an invite to the Sugar Bowl where they were taken down by Texas by a final score of 28-21. Jake Fromm is back under center after throwing for 2,761 yards, 30 touchdowns and 6 interceptions in a very successful freshman campaign in which he completed 67.4% of his pass attempts. D’Andre Swift will take over the main ball-carrying duties after leading Georgia with 1,049 rushing yards and 10 ground scores last season. Elijah Holyfield is gone, but Brian Herrien steps in to maintain Georgia’s 1-2 punch in the backfield. The only problem for Georgia is that their top three receivers from last season are gone and the Bulldogs also dismissed Jeremiah Holloman. Defensively, Jordan Davis, Tae Crowder, Monty Rice and Nolan Smith lead Georgia’s front seven while Eric Stokes and Tyson Campbell will be tasked with locking down Georgia’s secondary this season, all part of a defense that will hope to improve on last year’s effort where the Dawgs finished 2nd in terms of total defense last season. As a team, Georgia averaged 466.1 yards of total offense and 37.9 points per game while allowing 314.3 yards and 19.2 points per game last season.

The Vanderbilt Commodores will look to build on an decent showing in the 2018 season, finishing the year with a 6-7 overall record, including 3-5 in SEC play to finish 6th in the SEC East division. The Commodores received an invite to the Texas Bowl, a game in which Vanderbilt lost to Baylor by a final score of 45-38. Kyle Shurmur is gone at QB, but Riley Neal is expected to take the reins at QB after transferring over from Ball State. Ke’Shawn Vaughn also returns after logging 1,244 yards and 12 touchdowns on the ground last season, while Kalija Lipscomb and Jared Pinkney come back to Vandy to anchor the Commodores’ receiving group. Defensively, four of the top five tacklers from last season are gone from the program, but Dayo Odeyingbo returns to get the pass rush going up front, while Dimitri Moore steps in at linebacker and Tae Daley and Frank Coppet step into the secondary. As a team, Vanderbilt averaged 411.3 yards of total offense and 28.5 points per game while allowing 438.9 yards and 26.6 points per game defensively last season.

The Bulldogs lost some key pieces from last year’s team, including the likes of Elijah Holyfield, but Georgia still has a lot of depth and bring back the important pieces from last year’s group. Vanderbilt has undergone a rebuild with the better part of their team, and while it would be nice for Vanderbilt to make a statement at home in week 1, I just don’t see the Commodores having the horses to keep up with Georgia here. It’s a hefty line, but this should be all Georgia from start to finish so I’ll lay the points.