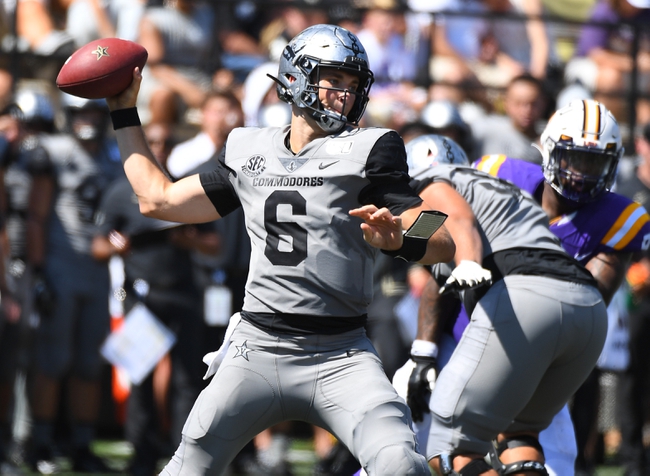 The Northern Illinois Huskies and the Vanderbilt Commodores meet in a week 5 non-conference college football matchup from Vanderbilt Stadium on Saturday afternoon.

The Northern Illinois Huskies will look to bounce back from back-to-back losses following a 44-8 beatdown at the hands of Nebraska in their last outing. Ross Bowers has thrown for 776 yards, 3 touchdowns and 3 interceptions on 61.3% passing. Tre Harbison leads the Huskies in rushing while Daniel Crawford leads NIU in receiving with 11 catches for 195 yards. Tyrice Richie also has 11 receptions for 175 yards while Spencer Tears has 141 receiving yards. Defensively, Antonio Jones-Davis and Jordan Cole each have a team-high 16 total tackles this season. As a team, Northern Illinois is averaging 347 yards of total offense and 16.3 points per game while allowing 390 yards of total defense and 29.7 points per game against this season.

The Vanderbilt Commodores will be out for their first win of the season after starting the year with 3 straight losses, falling to LSU in their last outing by a final score of 66-38. Riley Neal has thrown for 669 yards, 3 touchdowns and 2 interceptions on 58.2% passing while Ke’Shawn Vaughn leads the ‘Dores with 260 rushing yards and 3 touchdowns on the ground. Kalija Lipscomb leads Vanderbilt in receiving with 16 catches for 174 yards while Chris Pierce has 149 receiving yards and Jared Pinkney is Vandy’s 3rd 100-yard receiver so far this season. Defensively, Dashaun Jenkins leads the Commodores with 25 total tackles this season, including 15 solo tackles. As a team, Vanderbilt is averaging 363.3 yards of total offense and 22.7 points per game while allowing 541 yards of total defense and 46 points per game against this season.

Normally I’m not the guy to lay a touchdown with a winless team, even at home. But Vanderbilt hasn’t given themselves an easy go of things so far this season, as they’ve already played two top-10 teams in conference and at the same time did just rack up 38 points against a pretty good LSU defense. Northern Illinois has had success ATS against the SEC and have been a profitable road play for quite some time, but the Huskies haven’t looked good on the road at all this season, and I don’t think that changes here. I’ll lay the touchdown with Vanderbilt if forced to pick, but there’s much better options on Saturday’s card.