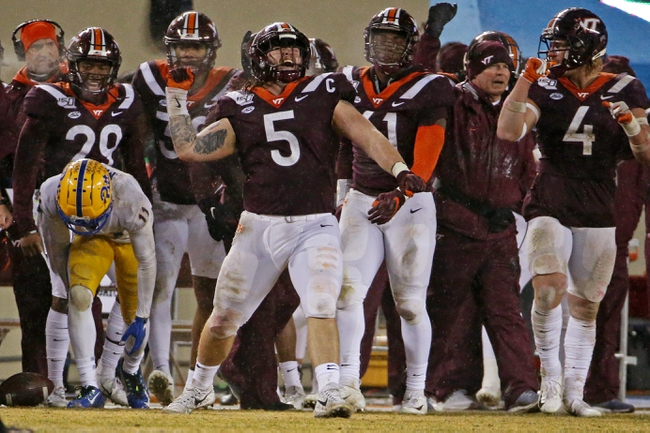 The #23 Virginia Tech Hokies travel to Charlottesville, VA on Friday for a game against the University of Virginia Cavaliers in a game that will decide the winner of the ACC’s Coastal Division. Virginia Tech enters Friday’s game after their second shutout win in a row, this time defeating the Pitt Panthers by the score of 28-0.  Virginia Tech quarterback Hendon Hooker completed 10 of 13 passing attempts for 153 yards and 2 touchdowns on the day.  Hooker also ran 20 times for 27 yards. The leading rusher for the Hokies was wide receiver Tayvion Robinson who rushed just 1 time but ran for 32 yards.  Robinson also led the Hokies in receiving in the game, catching 2 passes for 74 yards.  The Virginia Tech defense was a wall on the day and held Pitt to just 177 total yards including just 60 on the ground.

With the win against Pitt, Virginia Tech improved to 8-3 on the season and 5-2 in conference play which places them in a 1st place tie with Virginia in the ACC Coastal Division.  Quarterback Hendon Hooker had now thrown for 1,134 yards and 10 touchdowns on the season and has yet to throw an interception.  Hooker has also ran 90 times on the season, rushing for 262 yards and 4 touchdowns.  DeShawn McClease is the leading rusher for the Hokies as he has carried the ball 150 times for 631 yards and 5 touchdowns on the year.  Wide receiver Tre Turner has been the leading receiver for Virginia Tech as he caught 26 passes for 408 yards and 3 touchdowns this season.