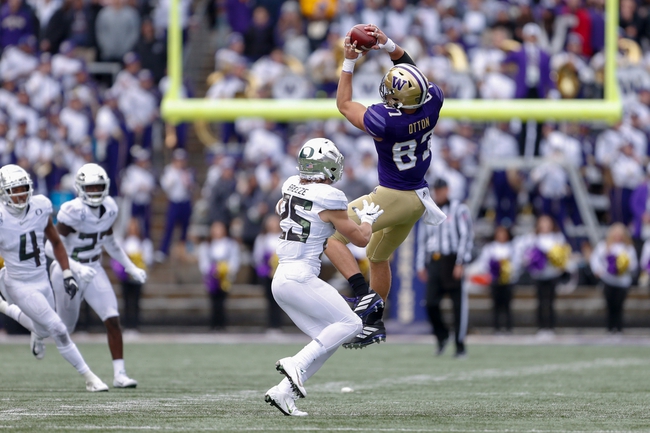 With two losses in the past three weeks, Washington (5-3, 2-3 Pac-12) has all but been eliminated from Pac-12 title contention. But it can still play spoiler to another conference championship contender on Saturday afternoon when the Huskies play host to Pac-12 Division co-leader and ninth-ranked Utah (7-1, 4-1 Pac-12).

The Utes are tied for first in the Pac-12 South Division, but Utah’s lone loss on the year came against USC, the team it is tied with atop the South Division, and the Trojans hold the tiebreaker with the head-to-head win. A Utah win at Washington, combined with a USC loss against Oregon, and the Utes will be in the driver’s seat cruising to the Pac-12 title game.

That scenario won’t be an easy one, though. First of all, the USC game is out of Utah’s hands, obviously, and the game is in Los Angeles, where USC defeated Utah. But secondly, even though this might seem like a somewhat depleted Washington squad, it is still the best in the Pac-12 at home since 2016 with a 22-3 record overall.

Make no mistake, this is a very good Huskies squad. Remember that Washington had current No. 7 Oregon on the ropes two weeks ago leading 31-21 with 3:39 remaining in the third quarter. The Ducks did come back to score twice and win 35-31, but if the Huskies can be that close to a team still trying to reach the playoff, clearly they are a great team in their own right. Washington is also coming off of a bye week, so there will be no excuse why it cannot create and implement a solid game plan to take on Utah.

Washington is led by quarterback Jacob Eason, who is projected by many as a first-round NFL draft pick. He has completed 157-of-233 passes for 1,981 yards and 16 touchdowns with just three interceptions. Eason has not thrown more than one interception all year, but he did throw a pick in two of his team’s three losses. The Husky offensive attack is balanced by junior tailback Salvon Ahmed, who has rushed for 683 yards and seven touchdowns on the season. Ahmed was especially impressive against Oregon, carrying the ball for 140 yards and a score against the tough Duck defense.

The Huskies have not lost back-to-back games since 2015 and Washington has also only lost to Utah once by the spread for Saturday’s game, a 34-23 defeat in 2015. In the other 10 matchups, Washington has won outright, including twice last year -- once in the regular season and once in the Pac-12 title game. But that one loss in 2015 was also the only time in the all-time series that Utah has entered the game nationally ranked and Washington has not.

While the Huskies enter the game losing two of three, Utah is playing the best football in the Pac-12 since its shocking 30-23 loss at USC a little more than a month ago. Since that time, the Utes are 4-0, and they are outscoring their opponents 146-23 in that time. These wins did come against three of the four bottom teams in the Pac-12 North as well as Arizona State, who appears to be falling back to reality with two straight losses and three losses in its last five games. Despite the opposition, however, Utah has built itself up to a top-10 ranked team in the nation in that time.

Utah runs the ball better than any team in the Pac-12 and ranks 22nd in the nation in rushing offense. In fact, the Utes have rushed for more than 190 yards in seven of eight games this year and have outgained their opponents in all eight games. In short, Utah will move the ball no matter the defense. Utah ranks 30th in FBS in total offense.

Leading the offense is senior quarterback Tyler Huntley, who has similar numbers to Eason. Huntley has completed 122-of-167 passes for 1,778 yards, 10 touchdowns, and just one interception. The best ground attack in the Pac-12 is led by senior Zack Moss, who has rushed for 728 yards and 10 touchdowns. In the Utes’ 35-0 thrashing of Cal last Saturday, Huntley was impressive completing 11-of-17 passes for 214 yards and a touchdown, while Moss ran 17 times for 115 yards and a pair of scores.

The question in this game is whether Washington will be able to score enough to keep up with Utah. The Utes will score, but they have only once scored more than 38 points this season, and that was against a Washington State defense that is questionable at best. On the road at Washington, offensive numbers similar to what they did against USC on the road would probably be more comparable.

So since that number was 23 and Washington is getting three points, can the Huskies score three touchdowns? That answer is yes. Washington has scored 20 or more points in all home games but two since 2015, and one of those games was the strange, weather-delayed game against Cal -- and the Huskies still scored 19 in that one. Washington is a team that is playing for pride and the best possible bowl that it can get into. Utah might win, but it’ll be very close. Take the ‘dog and the points.

The pick in this article is the opinion of the writer, not a Sports Chat Place site consensus.
Previous Pick
Charlotte vs. Middle Tennessee - 11/2/19 College Football Pick, Odds, and Prediction
Next Pick
Edmonton Eskimos at Saskatchewan Roughriders - 11/2/19 - CFL Picks & Predictions