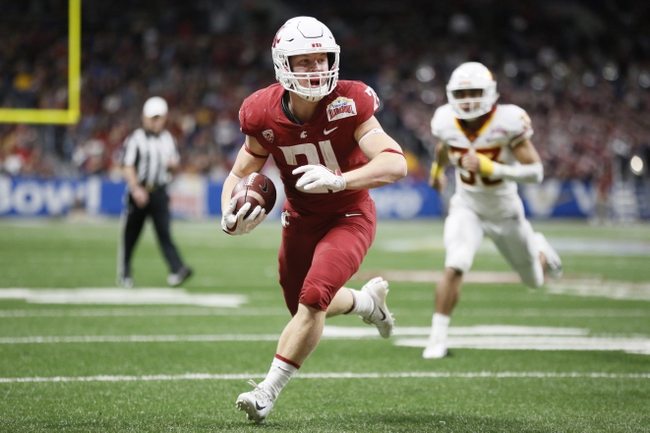 The New Mexico State Aggies come into the 2019 season looking to move on from a forgettable 2018 campaign that saw NMSU finish the season with an overall record of 3-9 , the worst record among all six independent programs. Josh Adkins is back under center for the Aggies after throwing for 2,563 yards, 13 touchdowns and 9 interceptions on 56.5% passing last season. Jason Huntley and Christian Gibson are also back in the Aggie backfield after totalling 1,095 yards and 13 touchdowns for New Mexico State on the ground last season. Huntley will also be expected to catch balls out of the backfield in addition to the five of NMSU’s six top pass catchers returning from last year’s squad, but that won’t include Jonathan Boone who led the team in receiving last season as his time with the program was up. Defensively, Javahn Ferguson returns after leading the Aggies with 131 tackles as well as registering 5.5 sacks last season, but that’s where the Aggies’ luck ends as the next three tacklers and five of the top eight tacklers from last season are no longer there. The D-line bring all of their talent back led by Myles Vigne and Roy Lopez but the secondary will need some time and work after losing some key pieces. As a team, New Mexico State averaged 371.2 yards of total offense and 25.2 points per game while allowing 475.8 yards and 41.3 points per game last season.

The Washington State Cougars will be out to build on one of the most successful seasons in program history, finishing the year with an 11-2 overall record, including a share of the Pac-12 North regular season championship but losing out on a spot in the Pac-12 title game to rival Washington after a loss in the Apple Cup to hand the Huskies the tiebreaker. Washington State got an invite to the Alamo Bowl where they defeated Iowa State by a final score of 28-26 for the school record 11th win. Gage Gubrud and Anthony Gordon will battle it out for the starting job after Gardner Minshew finished up his time with the Cougars. Max Borghi will be tasked with taking over ball-carrying duties for Washington State while Davontavean Martin and Dezmon Patton will lead the Cougars’ receiving corps after Martin had 69 receptions for 685 yards and 8 TDs while Patton led Wazzu with 816 receiving yards on 61 receptions with 5 TDs. Defensively, six of their top nine tacklers return including Jahad Woods who finished 2nd on the team with 82 tackles from the linebacker position. Willie Taylor and Dominick Sivels combined for 8.5 sacks and will also be in the linebacking group. As a team, Washington State averaged 452.5 yards of total offense, including the most productive passing offense in the country with 373.8 passing yards, as well as 37.5 points per game. Defensively, Washington State allowed 358.9 yards and 23.3 points per game last season.

Washington State is the better team here, so I can understand them being heavily favored especially at home. However, there’s still a lot that needs to be determined for the Cougars, including the starting QB and we need to see how Borghi will perform as the new main man in Washington State’s backfield. New Mexio State has some experienced pieces on offense and can put some points up. Laying this many points is a tricky proposition as one or two scores from the underdog early can sometimes be enough to bag you a cover in the end. I just can’t lay this many points right out of the gate with Washington State, so I’ll side with New Mexico State to at worst bag a backdoor cover with the boatload of points here.