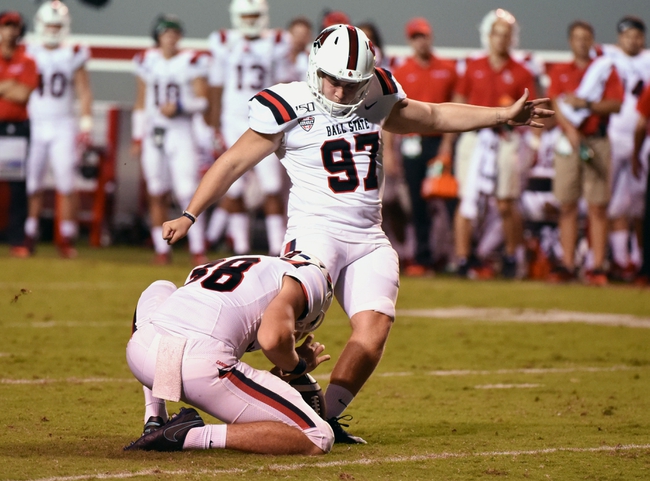 The Ball State Cardinals head to Western Michigan on Tuesday for a game against the Broncos in a game between two MAC – West teams.  In their last game, Ball State was defeated by the University of Ohio by the score of 34-21.  In their game against Ohio, quarterback Drew Plitt threw 20 times and completed 11 passes for 109 yards and a touchdown.  Receiver Yo’Heinz Tyler was the Cardinals leading receiver and caught 3 passes for 44 yards.  Plitt’s touchdown was caught by Riley Miller who caught 2 passes for 27 yards on the day.  The leading rusher for Ball State was Walter Fletcher who ran 14 times for 156 yards and a touchdown.

The loss dropped the Cardinals record to 4-4 on the season, but it was just their first loss in conference play as the Cardinals are now 3-1 in the conference and in 1st places in the MAC-West.  On the year, Plitt has thrown for 1,977 yards, 17 touchdowns and 6 interceptions.  Caleb Huntley has been Ball State’s most productive rusher and has carried the ball 152 times for 723 yards and 5 touchdowns.  Miller has been the Cardinals leading receiver as he has caught 32 passes for 457 yards and 5 touchdowns on the year.

The Western Michigan Broncos welcome Ball State to town after beating Bowling Green in their last game by the score of 49-10.  Quarterback Jon Wassink was 15 of 23 passing for 175 yards and 1 touchdown in the game.  Western Michigan was led in receiving by Skyy Moore who caught 5 passes for 76 yards and also hauled in Wassink’s touchdown pass.  While the passing numbers were decent, the day belonged to running back Levante Bellamy who ran 17 times for 178 yards and 4 touchdowns.

With the win, the Broncos are now 5-4 and 3-2 in conference play which puts them in 3rd place in the MAC-West.  On the year, Wassink has thrown for 2,273 yards, 16 touchdowns and 7 interceptions.  Bellamy has been the Broncos leading rusher and has now ran for 1,055 yards and 17 touchdowns on the season.  The lead receiver for Western Michigan is Giovanni Ricci who has caught 40 passes for 551 yards and 6 touchdowns.