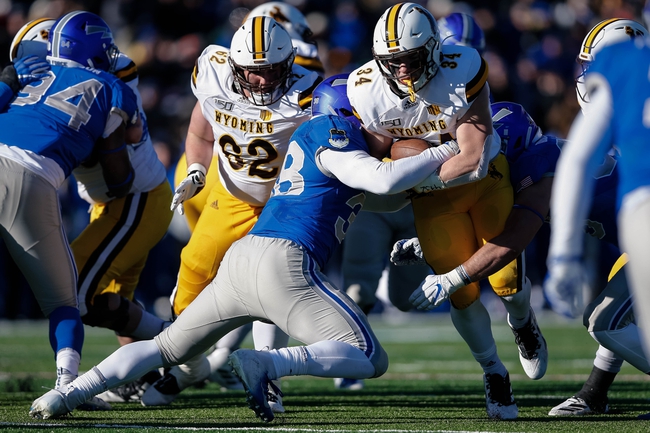 The Cowboys were led on the season by running back Xazavian Valladay.  Valladay rushed for 1,061 yds and 5 scores.  Quarterback Sean Chambers passed for 915 yds on 52 completions, while throwing 7 touchdowns and 3 picks.  Chambers added 567 yds on the ground, while hitting pay dirt for 10 more scores.  Alijah Halliburton leads the defense with 199 tackles.  Soloman Byrd finished the regulars season with 6.5 sacks.

The Panthers had a balanced offense all season long, led by quarterback Dan Ellington.  Ellington passed for 2,291 yds on 214 completions, while having a TD/INT ratio of 21 to 7.  Ellington nearly had 600 yds rushing and 5 scores on the ground.  Running back Tra Barnett rushed for 1,389 yds and 12 touchdowns.  Cornelius McCoy added 679 yds receiving and 4 touchdowns.  Defensively, Trajan Stephens-McQueen led the Cowboys in tackles with 97.

Cowboys are 4-1 ATS in their last 5 bowl games.

The under is 4-1-1 in Cowboys last 6 non-conference games.

Panthers are 2-8-2 ATS vs a team with a winning record.

The under is 5-2 in Panthers last 7 games overall.

The Cowboys are in a bowl game, due to their defense.  Wyoming had the 11th best scoring defense at the FBS level, giving up less than 18 points per game.  Wyoming has the 6th best rush defense in the country and will be going up against a Panthers running game that ranks 14th .  The Cowboys do struggle when it comes to pass defense.  Georgia State is a very balanced offense should be able to find success through the air if the rush offense is unable to get going.  The Panthers defensively have one of the worse defense's at the FBS level, giving up over 36 points per game.  Wyoming has had a great defense, but the Panthers have only been held below 27 points twice.  It would not surprise me if the Panthers win this, but I'll be safe and take the points.  Final score prediction, Wyoming will win, Georgia State will cover, 30-27.