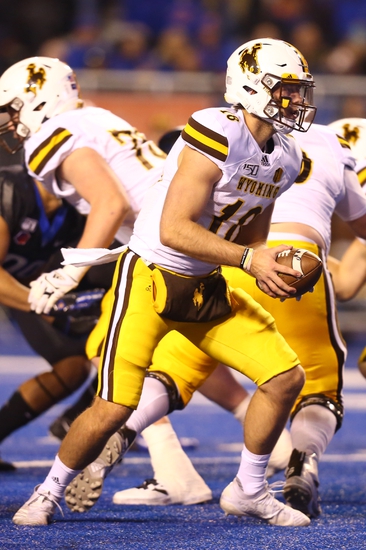 The Colorado State Rams head to Wyoming this Friday for a game against the Cowboys in a battle between two teams in the Mountain West’s Mountain Division.  The Rams enter Friday’s game after losing their last game to Air Force by the score of 38-21.  Colorado State quarterback Patrick O’Brien completed 28 of 43 passes for 347 yards and 2 touchdowns as well as throwing an interception.  The Ram’s leading receiver was Warren Jackson who caught 8 passes for 88 yards.  Marcus McElroy led the way for Colorado State on the ground as he carried the ball 11 times for 51 yards.  The Colorado State defense allowed 353 total yards, including 227 on the ground.

The Wyoming Cowboys welcome the Colorado State Rams to campus after losing their last game to Utah State by the score of 26-21.  Wyoming quarterback Tyler Vander Wall completed 20 of 36 passes for 185 yards but also threw 3 interceptions.  Vander Wall rushed 8 times in the game for 4 yards but scored 2 touchdowns on the ground.  The lead rusher for Wyoming was Xazavian Valladay as he rushed 25 times for 114 yards in the game.  Tight end Josh Harshman was the leading receiver for the day as he caught 6 passes for 76 yards.  The Cowboys defense allowed a total of 422 yards to Utah State including 317 through the air.

On the year, Wyoming is now 6-4 with a conference record of 3-3 which places them in a tie for 4th place in their division.  Wyoming’s most effective quarterback has been Sean Chambers has thrown for 915 yards on the season as well as for 7 touchdowns and 3 interceptions.  Xazavian Valladay has been the Cowboys leading rusher as he has carried the ball 180 times for 869 yards and 5 touchdowns on the year.  Raghib Ismail Jr. has been Wyoming’s leading receiver as he has caught 14 passes for 240 yards and 2 touchdowns on the season.

The pick in this article is the opinion of the writer, not a Sports Chat Place site consensus.
Previous Pick
Georgia Tech vs. NC State - 11/21/19 CFB Pick, Odds, and Prediction
Next Pick
Rutgers vs Michigan State 11/23/19 - College Football Pick, Odds & Prediction