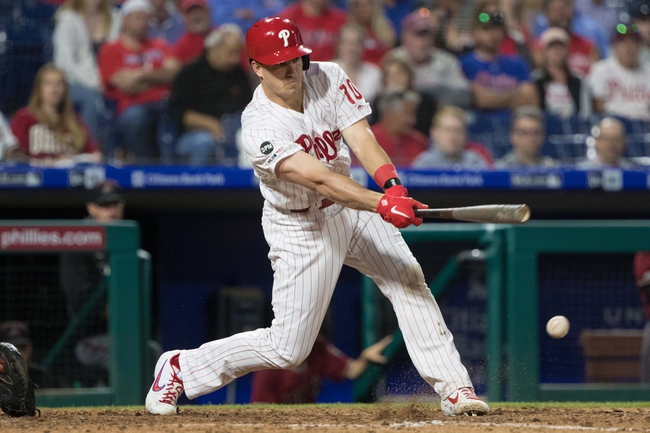 TV: FS-Arizona Stream the MLB Game of the Day all season on ESPN+. Sign up now!

The Philadelphia Phillies and the Arizona Diamondbacks meet in the opener of a three game set in MLB action from Chase Field on Monday.

The Philadelphia Phillies will look to find some consistency after alternating wins and losses in each of their last six games following a series loss to the White Sox, dropping the series rubber match on Sunday by a final score of 10-5. Corey Dickerson went 2 for 5 with a home run and three RBIs while Scott Kingery went 2 for 4 with a double and an RBI. Cesar Hernandez added an RBI to round out Philadelphia’s scoring as a team in the loss while J.T. Realmuto went 2 for 3 with a double. Andrew Knapp and Roman Quinn each had a base hit to cap off the Phillies’ offense as a team in the defeat. Drew Smyly took the loss, falling to 1-1 on the year after allowing five runs on four hits while striking out seven over five innings of work. Vince Velasquez will start game one and is 3-6 with a 4.40 ERA and 85 strikeouts this season. In his career, Velasquez is 1-2 with a 3.93 ERA and 19 strikeouts against Arizona.

The Arizona Diamondbacks will look to keep the momentum going after winning their series against Washington, following a 7-5 win in the rubber match on Sunday. Adam Jones went 3 for 4 with a pair of doubles and four RBIs while Nick Ahmed had a double and two RBIs. Ketel Marte went 3 for 4 with a solo home run to round out Arizona’s scoring as a team in the win while Christian Walker had a pair of hits to sum up Arizona’s offense in the victory. Taylor Clarke gave up three runs on four hits while striking out three over 5.2 innings of work. Yoshihisa Hirano got the win to improve to 4-5 on the year while Archie Bradley logged his 2nd save of the year. Merrill Kelly will start game one and is 7-11 with a 4.52 ERA and 100 strikeouts this season. This will be Kelly’s second career start against Philadelphia.

Arizona at home with a low line is tempting given the way that the D-Backs played against Washington over the weekend, but the problem is that Kelly has been a dumpster fire in the second half of the season, giving up seven runs in back to back starts, totalling 14 runs across 8.1 innings. Velasquez has been up and down but the Phillies have won three of Velasquez’s last four starts and I think they’re worth a play in game one on Monday.