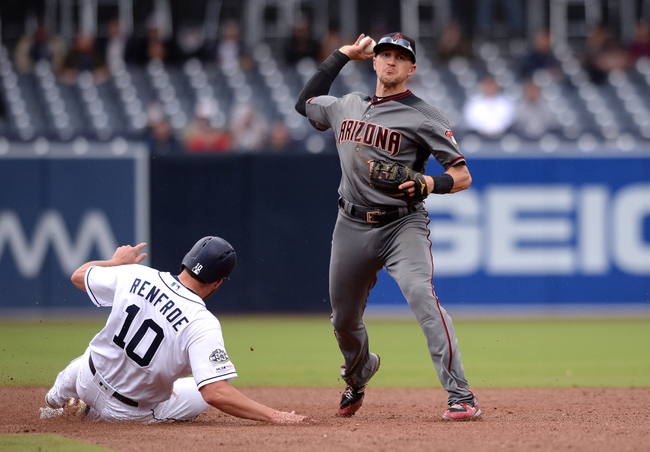 TV: FS-Arizona, FS-San Diego Stream the MLB Game of the Day all season on ESPN+. Sign up now!

The San Diego Padres and the Arizona Diamondbacks meet in game one of a three game NL West division set in MLB action from Chase Field on Monday.

The San Diego Padres will look to build some steam down the stretch after winning their series with San Francisco, including an 8-4 win in Sunday’s series finale. Ty France went 2 for 4 with a pair of home runs and four RBIs while Greg Carcia added a solo home run. Eric Hosmer, Manny Machado and Wil Myers each added a double with an RBI to cap off San Diego’s scoring as a team in the win with Hosmer going 3 for 4 with a triple as well. Josh Naylor went 2 for 4 at the dish while Nick Martini added a double and Travis Jankowski added a base hit in a pinch-hit role to cap off San Diego’s offense in victory. Eric Lauer got the win to improve to 8-8 on the year after allowing four runs on six hits while striking out nine over six innings of work. Cal Quantrill will start game one and is 6-5 with a 3.99 ERA and 71 strikeouts this season. This will be Quantrill’s first career start against Arizona.

The Arizona Diamondbacks will look to bounce back after failing to complete the sweep of the Dodgers, dropping the finale of the four game set by a final score of 4-3 in extra innings, snapping Arizona’s winning streak at six games. Jake Lamb had two RBIs while Josh Rojas added an RBI to cap off Arizona’s scoring as a team in the loss. Eduardo Escobar and Nick Ahmed each had two hits with Ahmed adding a double while Tim Locastro and Ketel Marte each had a base hit to round out Arizona’s offense as a team in the loss. Alex Young allowed two runs on five hits while striking out five over 4.1 innings of work, not factoring in the decision. Taylor Clarke took the loss in relief, falling to 4-5 on the year as a result. Mike Leake will start game one and is 10-10 with a 4.67 ERA and 111 strikeouts this season. In his career, Leake is 2-2 with a 3.30 ERA and 36 strikeouts against San Diego.

Arizona being favored at home makes sense as the Diamondbacks are hot over the last week and just took three of four from the best team in the National League in the Los Angeles Dodgers. However, Leake’s not a pitcher I usually try to get behind, and he’s posted a 6.28 ERA since being traded to the D-Backs, as well as a 6.06 ERA at home in three starts for Arizona. Quantrill’s had his ups and downs, but he actually has a lower ERA on the road compared to his home ERA and the Padres have been playing some decent baseball of their own as of late, so I’ll take a shot at San Diego and the plus money on Monday.