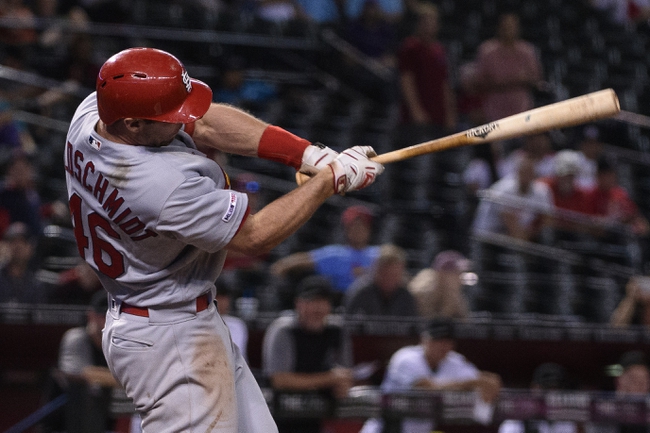 The St. Louis Cardinals and the Arizona Diamondbacks meet in the rubber match of their three game set in MLB action from Chase Field on Wednesday.

The St. Louis Cardinals will look to bounce back and win the set after dropping game two in 19 innings by a final score of 3-2. Dexter Fowler and Paul Golsdschmidt each had a solo home run to make up the scoring for St. Louis while Yadier Molina went 2 for 8 with a double. Tommy Edman and Harrison Bader each had two hits while Jack Flaherty, Paul DeJong, Matt Carpenter and Randy Arozarena each had a base hit to cap off the Cardinals’ offense in the loss. Jack Flaherty allowing just one hit over seven scoreless innings while striking out 11, not factoring in the decision while John Brebbia took the loss to fall to 3-3 this year. Michael Wacha will start game three and is 6-7 with a 4.68 ERA and 101 strikeouts this season. In his career, Wacha is 2-1 with a 3.48 ERA and 31 strikeouts against Arizona.

The Arizona Diamondbacks will look to win the series after evening the set up at one win apiece following Tuesday’s win. Ildemaro Vargas went 4 for 6 with a home run, a double and two RBIs while Caleb Joseph added an RBI to finish off Arizona’s scoring as a team in the win. Nick Ahmed went 2 for 7 with a triple while Eduardo Escobar also had two hits. Josh Rojas, Carson Kelly, Tim Locastro and Jon Duplantier each had a base hit to cap off Arizona’s offense as a team in the win. Mike Leake threw six innings of one run baseball, allowing four hits while striking out four, not factoring in the decision, while Kevin Ginkel got the win to improve to 2-0. Merrill Kelly will start game three and is 12-14 with a 4.31 ERA and 151 strikeouts this season. This will be Kelly’s second career start against St. Louis.

The plus money is definitely worth a look as Kelly is sitting on back-to-back seven inning shutouts, and these two teams did play a marathon last night so the quick turnaround usually favors the home team. However, St. Louis has been one of the hotter teams in the majors for quite some time, and the Cardinals need to keep winning games if they want to lock up the division. The home dog is tempting, but this is a solid price on the Cardinals given how they’ve played over the last couple of months, so I’ll lay the juice with the Cardinals for the series win here.