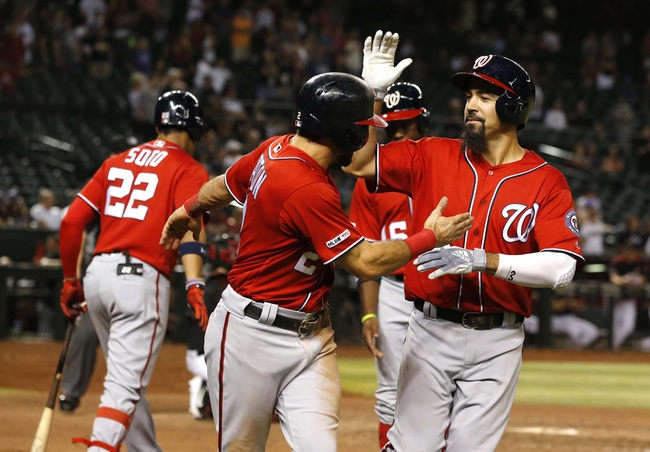 TV: FSAZ, MAS2 Stream the MLB Game of the Day all season on ESPN+. Sign up now!

The Washington Nationals look for a win after splitting their last 12 games. The Nationals have scored 14 runs in their last three games and four or more runs in six of their last nine games. The Washington Nationals have lost four of their last six games when scoring four or more runs. Adam Eaton leads the Nationals with 114 hits and 29 RBI while Anthony Rendon and Juan Soto have combined for 219 hits and 155 RBI. Patrick Corbin gets the ball, and he is 9-5 with a 3.23 ERA and 159 strikeouts this season. This will be Corbin’s first career game against the Diamondbacks.

Corbin has allowed 40 hits and 10 runs in his last 51 innings, but he does have a 5.04 ERA and .271 allowed batting average on the road this season. Clarke has allowed 19 hits and nine earned runs in his last 18.2 innings, and he has a 6.35 ERA and .278 allowed batting average in 22.2 innings at home. Corbin has pretty much pitched out of his mind in his last several starts, and you know he's had this game circled for quite some time after spending his first six seasons with the Diamondbacks. I'll side with the Washington Nationals.