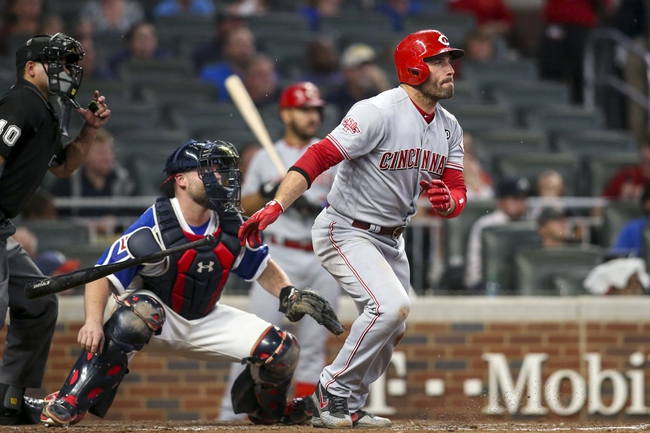 The Cincinnati Reds and the Atlanta Braves meet in game two of a four game set in MLB action from SunTrust Park on Friday.

The Cincinnati Reds will look to rebound after dropping game one in a rain-shortened 4-1 defeat on Thursday. Jose Peraza had Cincinnati’s lone RBI while Joey Votto, Phillip Ervin and Jose Iglesias each had a base hit as none of Cincinnati’s four this went for extra bases in the losing effort. Anthony DeSclafani took the loss, falling to 6-6 on the year after allowing three runs on six hits while striking out five over five innings of work. Alex Wood will start game two and is 0-0 with a 3.86 ERA and 4 strikeouts this season. In his career, Wood is 2-3 with a 4.68 ERA and 18 strikeouts against Atlanta.

The Atlanta Braves will look to keep the momentum going after winning three in a row with Thursday’s series opening victory. Freddie Freeman had a home run and three RBIs while Adam Duvall added a solo home run of his own to round out Atlanta’s scoring as a team in the loss. Ozzie Albies went 2 for 3 while Ronald Acuna Jr. and Josh Donaldson each had a double. Brian McCann and Max Fried each chipped in a base hit to round out Atlanta’s offense as a team in the win. Fried got the win to improve to 12-4 on the year after allowing one run on four hits while striking out four over six innings of work. Kevin Gausman will start game two and is 3-6 with a 5.97 ERA and 80 strikeouts this season. In his career, Gausman is 0-2 with a 14.63 ERA and 8 strikeouts against Cincinnati.

Atlanta should probably be favored at home because they’re the better team and they’re in a better position than Cincinnati when it comes to the playoff picture. However, Gausman is coming off of a start in which he allowed six runs in six innings, and in eight career innings against Cincinnati, Gausman’s allowed 14 runs, 13 earned, across two starts. Wood is still getting his feet wet after making his first start of the season last week, but the stuff is there and you have to imagine that guys like Wood relish chances like these to face a former team. I think if Cincinnati were going to steal a game in this series, it’s probably this one, so I’ll take a shot with Cincinnati and the plus money here.