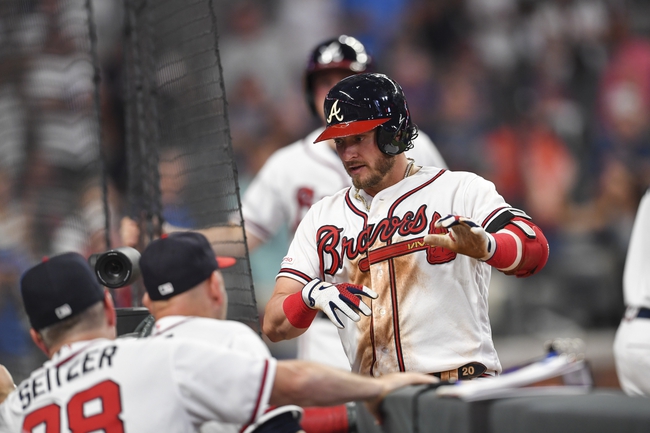 TV: SNLA, FSSO, TBS Stream the MLB Game of the Day all season on ESPN+. Sign up now!

The Los Angeles Dodgers look for a win after winning 10 of their last 13 games. The Dodgers have scored 18 runs in their last three games and four or more runs in eight of their last 12 games. The Los Angeles Dodgers have won 11 of their last 12 games when scoring four or more runs. Cody Bellinger leads the Dodgers with 138 hits and 94 RBI while Justin Turner and Max Muncy have combined for 229 hits and 142 RBI. Tony Gonsolin gets the ball, and he is 1-1 with a 3.21 ERA and 13 strikeouts this season. This will be Gonsolin's first career game against the Braves.

The Atlanta Braves look for a win after winning seven of their last 11 games. The Braves have scored 15 runs in their last three games and four or more runs in nine of their last 11 games. The Atlanta Braves have won seven of their last nine games when scoring four or more runs. Ronald Acuna Jr. leads the Braves with 150 hits and 85 RBI while Ozzie Albies and Freddie Freeman have combined for 293 hits and 166 RBI. Max Fried gets the ball, and he is 14-4 with a 3.78 ERA and 126 strikeouts this season. Fried is 0-2 with a 7.50 ERA and eight strikeouts in his career against the Dodgers.

Gonsolin has just 14 big league innings under his belt and he hasn't pitched in two weeks. Fried has allowed 36 hits and 11 earned runs in his last 32.2 innings, and he has a 3.53 ERA and .268 allowed batting average at home. The Braves are 10-2 with Fried on the mound since June, and he's allowed two earned runs in his last 17.1 innings. The sample size isn't big enough for me to have confidence in Gonsolin just yet, especially when going up against Braves lineup this talented. I have the Braves winning another one against the Dodgers.