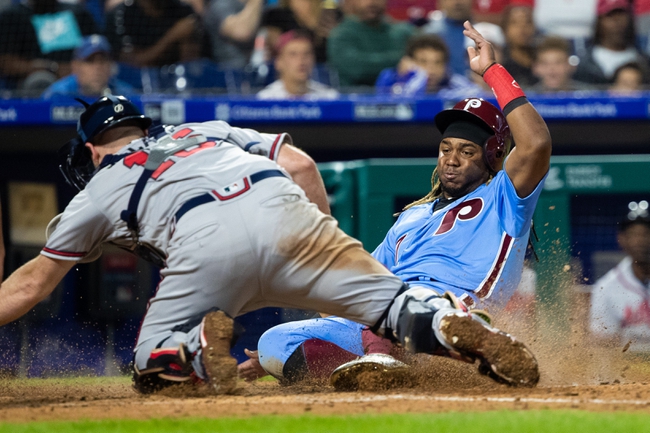 The Philadelphia Phillies and the Atlanta Braves meet in game one of a three game NL East division set in MLB action from SunTrust Park on Tuesday night.

The Philadelphia Phillies will look to bounce back after being swept by the Red Sox over the weekend, culminating with a 6-3 loss in Sunday’s series finale. Cesar Hernandez and Rhys Hoskins each had two hits with an RBI with Hoskins going 2 for 3 with a solo home run. Jean Segura added an RBI to round out Philly’s scoring as a team in the loss while J.T. Realmuto and Phil Gosselin each had a base hit to round out Philadelphia’s offense in defeat. Jason Vargas took the loss, falling to 6-8 on the year after allowing five runs, four earned, on three hits while striking out six over three innings of work. Vince Velasquez will start game one and is 6-7 with a 4.95 ERA and 113 strikeouts this season. In his career, Velasquez is 0-6 with a 5.36 ERA and 56 strikeouts against Atlanta.

The Atlanta Braves will look to get one step closer to the division title after winning their series with Washington, failing to complete the sweep with a 7-0 loss in Sunday’s series finale. Freddie Freeman had a double while Nick Markakis, Brian McCann and Austin Riley each had a base hit as the Braves mustered up just four hits as a team in the loss. Max Fried took the loss, falling to 16-6 after allowing five runs on six hits while walking three over 2.1 innings of work. Dallas Keuchel will start game one and is 8-5 with a 3.38 ERA and 81 strikeouts this season. In his career, Keuchel is 2-1 with a 1.42 ERA and 15 strikeouts against Philadelphia.

I’d like to give Philly a chance here, but the fact is that Velasquez has had literally no success against the Braves in his career and Philadelphia is slumping down the stretch. Atlanta has one hand on the division crown and Keuchel is pitching like the ace that Atlanta was hoping they’d acquire, winning each of his last five starts and giving up two runs or less in each of his last six starts, totalling just four runs allowed in his last 37 innings of work. Keuchel’s also stymied the Phillies in his career, so I’ll side with the Braves to draw first blood and to cut down the heavy juice, I’ll take Atlanta on the RL.