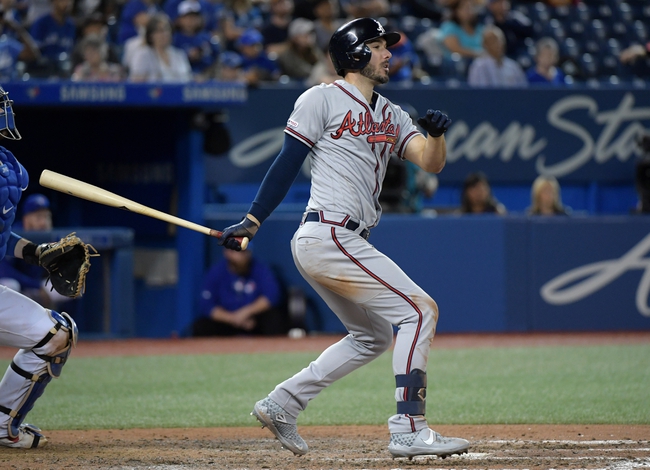 TV: RSN, FS-Southeast Stream the MLB Game of the Day all season on ESPN+. Sign up now!

The Toronto Blue Jays and the Atlanta Braves meet in the opener of a mini two game interleague set in MLB action from SunTrust Park on Monday.

The Toronto Blue Jays will look to bounce back after dropping their series finale against Houston by a final score of 2-0 on Sunday, with the Jays being no-hit by Astros pitcher Justin Verlander. Verlander recorded his 2nd career no-hitter against Toronto and 2nd at Rogers Centre, making him the first pitcher in MLB history with two no-hitters in the same road ballpark. Rowdy Tellez went 0 for 3 with all 3 outs coming via strikeout, while Bo Bichette, Cavan Biggio, Justin Smoak and Randal Grichuk each had two Ks. Ken Giles ended up with the loss in relief, dropping his record to 2-3 on the year this season. Jacob Waguespack will start game one and is 4-2 with a 3.93 ERA and 42 strikeouts this season. This will be Waguespack’s second career start against Atlanta.

The Atlanta Braves will look to keep the momentum going after winning four in a row, completing the sweep of the Chicago White Sox with a 5-3 win in Sunday’s series finale. Freddie Freeman went 3 for 4 with a pair of home runs and all five RBIs for Atlanta in the win. Johan Camargo added a double while Josh Donaldson and Adeiny Hechavarria each added a base hit to cap off Atlanta’s offense as a team in the win. Julio Teheran gave up two runs on three hits while walking four and striking out five over six innings of work. Mark Melancon closed out the 9th for his 8th save. Mike Soroka will start game one and is 10-3 with a 2.44 ERA and 113 strikeouts this season. In his career, Soroka is 0-1 with a 5.06 ERA and 3 strikeouts against Toronto.

The heavy plus money with Toronto is kind of tempting given that the Jays took down Soroka just a week ago and Waguespack has been a solid arm for the Young Blue Jays early on. However, the Braves are in the playoff hunt and Toronto is not, and while a team is usually eager to do some offensive damage after being no-hit, it’s hard for me to put faith in a Blue Jays team that has nothing to play for in the last month except for developing the young players. I’ll side with Atlanta for the sweep and to cut down the juice, I’ll take the Braves on the RL.