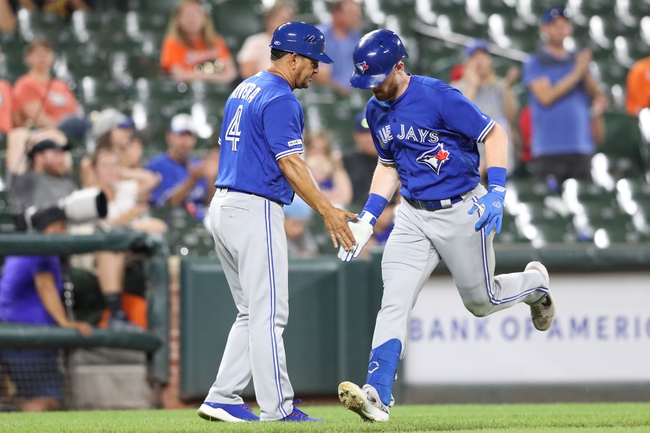 TV: RSN, MASN Stream the MLB Game of the Day all season on ESPN+. Sign up now!

The Toronto Blue Jays and the Baltimore Orioles meet in game two of a four game AL East division set in MLB action from Camden Yards on Friday.

The Toronto Blue Jays will look to keep the ball rolling after making it four wins in a row with an 11-2 beatdown in game one on Thursday. Vladimir Guerrero Jr. went 3 for 5 with a pair of home runs, a double and four RBIs while Danny Jansen went 3 for 5 with a home run and three RBIs. Billy McKinney had a home run and two RBIs while Randal Grichuk added a solo home run and Bo Bichette had a double and an RBI to finish off Toronto’s scoring as a team in the win. Cavan Biggio also had two hits to cap off the Blue Jays’ offense in the victory. Trent Thornton allowed one run on five hits over six innings of work to pick up the victory, improving to 4-7 on the year with the win. The Blue Jays did not announce a starting pitcher at the time of posting.

The Baltimore Orioles will look to rebound after being pummeled in the series opener on Thursday. Trey Mancini had a solo home run while Jonathan Villar added an RBI of his own to cap off the Orioles’ scoring as a team in the loss. Hanser Alberto and Chris Davis each had two hits while Renato Nunez, Chance Sisco and Stevie Wilkerson each had base hits as well in the losing effort. Asher Wojciechowski gave up four runs on six hits while walking three and striking out five over 4.2 innings of work, taking the loss to fall to 2-4 on the year. Aaron Brooks will start game two and is 2-4 with a 5.46 ERA and 52 strikeouts this season. In his career, Brooks is 0-3 with a 24.55 ERA and 7 strikeouts against Toronto.

I was dead wrong with the Orioles on Thursday, as I thought it was their best chance to steal a game but the youth movement for Toronto kept the ball rolling for the Jays. New, Toronto gets to feast on a pitcher in Brooks that they’ve owned over the years, and that career ERA isn’t a typo. Brooks has allowed 20 runs in just 7.1 career innings against Toronto. Brooks has also allowed 11 runs, 10 earned, in his last 8.2 innings of work across his last two starts. I just think that Toronto has all of the momentum going for them right now and should be able to take game two on Friday.