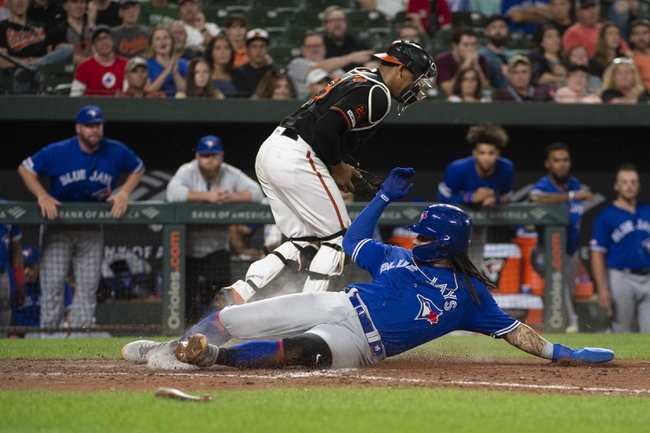 TV: RSN, MASN Stream the MLB Game of the Day all season on ESPN+. Sign up now!

The Toronto Blue Jays and the Baltimore Orioles meet in game three of a four game AL East division set in MLB action from Camden Yards on Saturday.

The Toronto Blue Jays will look to win the series and push for a sweep on Sunday after taking the first two games of the series following a 5-2 win in game two on Friday. Freddy Galvis went 3 for 4 with a home run and two RBIs while Brandon Drury added a solo home run. Vladimir Guerrero Jr. and Derek Fisher each had an RBI to round out Toronto’s scoring as a team in the win while Bo Bichette and Lourdes Gurriel Jr. each had a double to cap off the Blue Jay offense in the victory. Nick Kingham picked up the win in relief to improve to 3-1 on the year while Derek Law picked up his 1st save of the season by closing out the 8th and 9th innings. Thomas Pannone will start game three and is 2-4 with a 5.98 ERA and 47 strikeouts this season. In his career, Pannone is 1-1 with a 4.11 ERA and 9 strikeouts against Baltimore.

The Baltimore Orioles will look to bounce back and get a win on the board after dropping game two on Friday. Chris Davis had a home run and accounted for both Oriole RBIs while Richie Martin and Anthony Santander each went 2 for 3 at the dish. Jonathan Villar added a double while Pedro Severino chipped in a base hit as well to finish off Baltimore’s offense as a team in the defeat. Aaron Brooks took the loss, falling to 2-5 on the year after allowing three runs on five hits while walking three and striking out four over five innings of work. Dylan Bundy will start game three and is 5-11 with a 5.23 ERA and 105 strikeouts this season. In his career, Bundy is 4-3 with a 3.23 ERA and 54 strikeouts against Toronto.

You could make a case for Baltimore and the plus money given that Pannone has an ERA just under eight on the road this season for Toronto. However, Bundy hasn’t been much better at home, going 1-7 with an ERA over six at Camden Yards this season. The Orioles also haven’t given us a reason to back them in any role for much of the season, and this series has been no different. Toronto’s injection of youth into the team appears to be paying early dividends as the Blue Jays have been on a roll lately, and I think that continues into Saturday as well so I’ll lay the juice with Toronto on the road here.