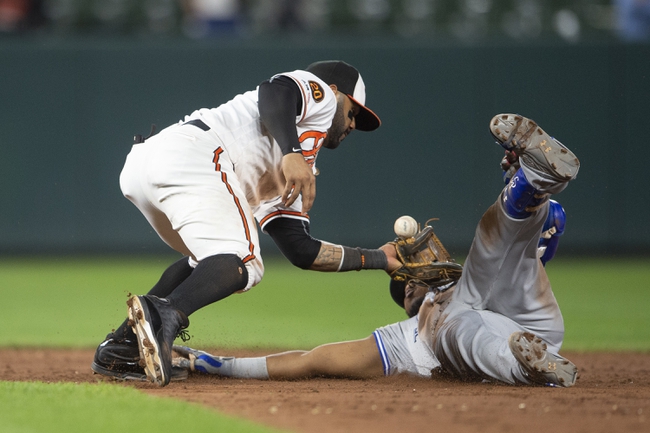 The Toronto Blue Jays look for another win after winning six of their last eight games. The Blue Jays have scored 25 runs in their last three games and four or more runs in seven of their last eight games. The Toronto Blue Jays have won six of their last seven games when scoring four or more runs. Randal Grichuk leads the Blue Jays with 129 hits and 76 RBI while Vladimir Guerrero Jr. and Brandon Drury have combined for 208 hits and 94 RBI. Anthony Kay gets the ball, and he is 0-0 with a 6.30 ERA and 10 strikeouts this season. This will be Kay’s first career game against the Orioles.

The Baltimore Orioles need a win after losing 10 of their last 13 games. The Orioles have scored 17 runs in their last three games and four or more runs in nine of their last 12 games. The Baltimore Orioles have lost six of their last nine games when scoring four or more runs. Jonathan Villar leads the Orioles with 163 hits and 68 RBI while Trey Mancini and Hanser Alberto have combined for 310 hits and 136 RBI. Aaron Brooks gets the ball, and he is 5-8 with a 6.06 ERA and 77 strikeouts this season. Brooks is 0-4 with a 16.78 ERA and 11 strikeouts in his career against the Blue Jays.

Kay has allowed 11 hits and seven runs through his first 10 major league innings, but he is averaging a strikeout per inning. Brooks has allowed 19 hits and 11 earned runs in his last 12.1 innings, and he has a 6.00 ERA and .275 allowed batting average at home. The Baltimore Orioles are unbackable with the way they're playing, as it's a team that's counting the days until the offseason and isn't concerned with winning. The Toronto Blue Jays may not have much to play for, but they're still a scrappy young team that's clearly out there playing hard and trying to build positive vibes heading into the 2020 season. Give me the team that's still playing hard at this point in the season.