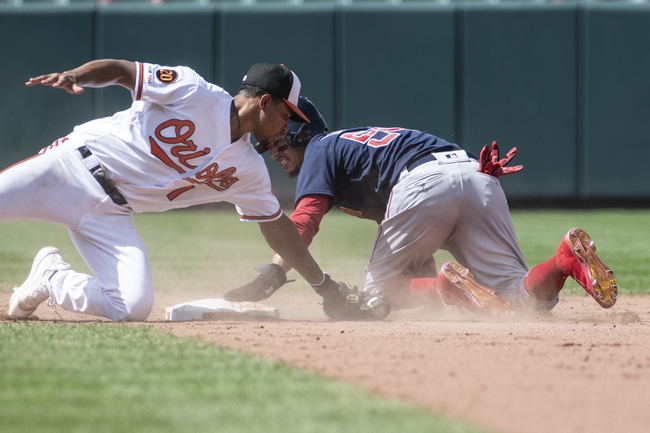 The Baltimore Orioles and the Boston Red Sox meet in game one of a three game AL East division set in MLB action from Fenway Park on Friday night.

The Baltimore Orioles could use a win after losing four straight and nine of ten following a 6-5 loss in Wednesday’s series finale against the Yankees, watching the O’s get swept once again, this time in four games. Renato Nunez went a perfect 5 of 5 with a double and two RBIs while Jonathan Villar went 2 for 4 with a double and two RBIs as well. Pedro Severino had an RBI to finish off Baltimore’s scoring as a team in the loss, while Hanser Alberto had a double and Stevie Wilkerson added a base knock as well in the defeat. Dylan Bundy took the loss, falling to 5-13 on the year after allowing six runs on five hits while striking out four over 5.2 innings of work. Aaron Brooks will start game one and is 2-6 with a 6.35 ERA and 59 strikeouts this season. In his career, Brooks is 1-1 with a 4.61 ERA and 10 strikeouts against Boston.

The Boston Red Sox will look to pick up some momentum after winning their series with Cleveland, taking Wednesday’s rubber match by a final score of 5-1. Xander Bogaerts went 3 for 4 with a pair of home runs and four RBIs while Rafael Devers had a solo home run. Andrew Benintendi went 2 for 4 with a double and Mookie Betts added a two-bagger as well while Christian Vazquez went 2 for 4 at the dish. Sam Travis and Marco Hernandez each added a base hit as well in the victory for the BoSox. Nathan Eovaldi picked up the win in relief for his first victory of the season. Rick Porcello will start game one and is 10-9 with a 5.67 ERA and 107 strikeouts this season. In his career, Porcello 7-12 with a 4.92 ERA and 106 strikeouts against Baltimore.

You keep getting heavy plus money with Baltimore, but the issue with the Orioles is that they don’t play well enough to even warrant taking a shot on it because the O’s just burn a hole in your pocket, and having Brooks hasn’t helped either as it’s been tough sledding since coming over from Oakland, as Brooks has allowed 23 runs, 22 earned, across 16.2 innings in his last four starts, including nine runs in three innings last time up. On the other hand, Porcello has allowed four or more runs in seven of his last nine starts and the games are usually shootouts with Porcello on the bump. As a matter of fact, the over has hit in each of Porcello’s last 8 starts, so while the total seems high, I think both teams can combine for some offense so I’ll back the over here.