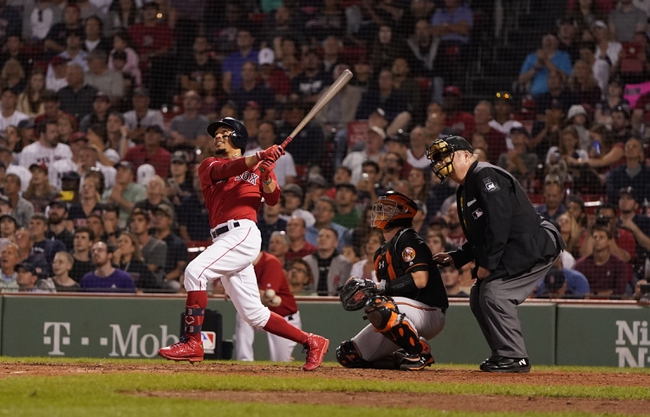 The Baltimore Orioles and the Boston Red Sox meet in game two of their three game AL East division set in MLB action from Fenway Park on Saturday.

The Baltimore Orioles will be out to snap a five game losing streak after opening the series with a 9-1 loss in game one on Friday. Trey Mancini had a double and the Orioles’ lone RBI while Jonathan Villar and Chance Sisco each had two hits as the Orioles had just five hits as a team in the losing effort on Friday. Aaron Brooks took the loss, falling to 2-7 on the year after allowing five runs on eight hits over 5.1 innings of work. Asher Wojciechowski will start game two and is 2-5 with a 4.84 ERA and 52 strikeouts this season. This will be Wojciechowski’s second career start against Boston.

The Boston Red Sox will look to build up some momentum after three straight wins following Friday’s series opening victory. Andrew Benintendi went 3 for 4 with a triple, a double and two RBIs while Chris Owings added a double and two RBIs of his own. Mookie Betts had a solo home run and a double while Rafael Devers went 2 for 4 with a double and an RBI as well. Mitch Moreland had a triple and an RBI while J.D. Martinez and Jackie Bradley Jr. each added an RBI as well with Martinez chipping in a double to finish off Boston’s scoring as a team in the win. Xander Bogaerts also had a two-bagger to sum up Boston’s offense in the victory. Rick Porcello got the win to improve to 11-9 on the year after allowing one run on four hits over six innings of work. Eduardo Rodriguez will start game two and is 13-5 with a 4.31 ERA and 145 strikeouts this season. In his career, Rodriguez is 8-5 with a 3.46 ERA and 99 strikeouts against Baltimore.

The plus money with Baltimore is somewhat tempting given that Wojciechowski has thrown 9.1 shutout innings against the BoSox in his young career. However, no matter how much plus money we’re getting (unless it’s an astronomical amount), the Orioles haven’t played well enough to warrant taking a shot on them under any circumstance. Boston’s been a mixed bag of results lately, but they flexed some serious muscle in game one, and all they seem to do with Rodriguez on the mound is win games, so I’ll side with Boston for another win here and to cut down the heavy juice, I’ll take the Red Sox on the RL here.